BY hellodrdavis on July 15, 2019 | Comments: one comment
Related : Soap Opera, Spoiler, Television, The Bold and the Beautiful 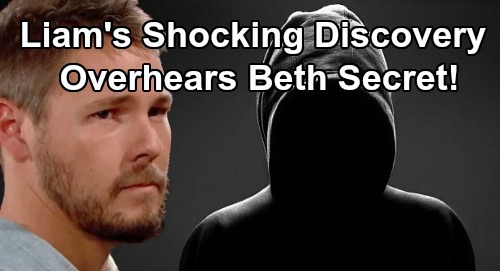 The Bold and the Beautiful (B&B) spoilers tease that Liam Spencer (Scott Clifton) will be at his wit’s end. As B&B viewers know, he’s quite unhappy about Hope Logan’s (Annika Noelle) engagement to the manipulative Thomas Forrester (Matthew Atkinson), and things will only get worse once he learns that Hope and Thomas are going to get married asap.

Of course, Thomas manipulated things so that Hope would want to get married right away. He intentionally frightened Douglas Forrester (Henry Joseph Samiri) with a fake ghost so that Douglas would need a mother’s love and support. The plan worked perfectly, as Hope immediately concluded that Douglas needed his new mommy pronto.

Well, Liam won’t take the quick wedding well. He knows that something is just wrong about Thomas’ intense desire to marry Hope and do it quickly, but he can’t prove anything and there’s a lot that he doesn’t know. As B&B viewers know, Thomas knows that Beth Spencer is alive, and he’s deliberately concealing her existence so he can have Hope all to himself.

And worse, Thomas is willing to do just about anything to keep Beth’s existence a secret. He chased down Emma Barber (Nia Sioux) and contributed to her fatal car accident on Mulholland Drive, and he’s threatening Florence “Flo” Fulton (Katrina Bowden), Zoe Buckingham (Kiara Barnes), and Xander Avant (Adain Bradley) with prison if they spill the truth. It’s totally devious.

But in the coming days, Liam just might get a little closer to the truth. According to The Bold and the Beautiful spoilers, Liam will overhear a conversation not meant for him and he’ll get curious. Exactly who he hears and what he hears remains to be seen, but given that Thomas, Zoe, Flo, and Xander are constantly having clandestine conversations about Beth and Emma, it’s likely that he’ll hear part of a conversation between some of them.

And that leads us to wonder whether Liam will ultimately be the one who busts the Beth secret wide open. We know that the secret about Beth is going to be revealed at some point, but exactly how the truth is going to come out is anyone’s guess at this point. But since Liam is going to overhear a conversation not meant for him, perhaps that indicates that he’ll launch a secret investigation to get to the bottom of what he hears.

The Bold and the Beautiful buzz is that there’s a good chance that Liam will hear something either said by Thomas or about Thomas that has to do with a secret. That’s something that would definitely pique Liam’s interest. Of course, his goal would likely be to find something incriminating against Thomas that he could use to persuade Hope to end her marriage to the evil manipulator.

It will be interesting to see exactly what Liam hears and what that leads him to do next. Do you think he’ll be the one to bust the Beth secret wide open? Stay tuned to the CBS soap and don’t forget to check CDL often for the latest Bold and the Beautiful spoilers, updates, and news.