The Bold and the Beautiful Spoilers: Liam Rages at Unconscious Thomas, Insists Deadly Crisis Is Karma – Papa Ridge Fights Back

BY Heather Hughes on August 23, 2019 | Comments: one comment
Related : Soap Opera, Spoiler, Television, The Bold and the Beautiful 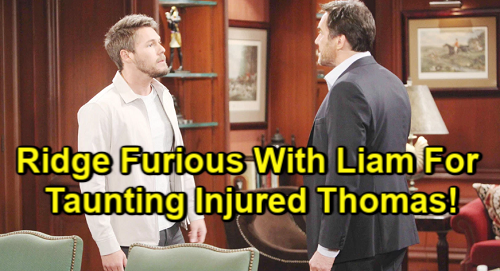 The Bold and the Beautiful (B&B) spoilers tease that Thomas Forrester (Matthew Atkinson) will linger between life and death. A faceoff with Hope Logan (Annika Noelle) at the cliff house will bring Brooke Forrester (Katherine Kelly Lang) on the scene. Things will take a terrible turn, which will lead to Thomas’ horrifying accident and a stint in the hospital.

Hope will feel guilty once Thomas is seriously injured and barely hanging on. This isn’t an outcome she would’ve wished on Thomas at all, no matter how furious she was with him.

As “Bridge’s” marriage crumbles and Thomas struggles to survive, Hope will find herself incredibly overwhelmed. The Bold and the Beautiful spoilers say Hope will lean on Liam during this difficult time. It should bring them closer, but Liam won’t want Hope having any kind of guilt over the situation. He’ll assure Hope that absolutely none of this is her fault and put the blame squarely on Thomas.

In fact, Liam will decide to let Thomas know exactly what he thinks of him. Thomas will be unconscious when he’s confronted, but that won’t affect Liam’s angry speech. He’ll probably prefer a comatose Thomas since he won’t have to see that smug smile or hear any more lies.

B&B spoilers say Liam will explode at Thomas in his hospital room. He’ll fly into a rage over all the pain Thomas caused and perhaps suggest they’d all be better off if he were dead.

Liam certainly won’t feel sorry for Thomas and he won’t think this excuses his awful behavior. He’ll feel like karma just came for Thomas hard, so he’ll likely be satisfied on some level.

Of course, Ridge won’t feel the same way! He’ll find Liam unleashing his fury over Thomas’ dying body, so he’s not going to appreciate this outburst. Ridge will call Liam out for his cruelty and fly into a rage of his own.