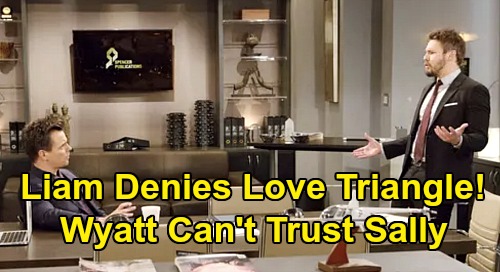 The Bold and the Beautiful (B&B) spoilers tease that Wyatt Spencer (Darin Brooks) will battle growing concerns about his relationship. He’s normally the kind of guy who falls hard and goes all in, but he’s facing doubts about his commitment to Sally Spectra (Courtney Hope). Things already felt off between them, but Sally’s recent slipup made matters worse.

During the week of December 9-13, Wyatt will reexamine his feelings for Sally and focus on what he really wants. He’ll have to decide he can trust Sally enough to say his wedding vows. That won’t be an easy thing to figure out, especially since Sally called Wyatt by Liam Spencer’s (Scott Clifton) name. Sally assured Wyatt it was an innocent mistake and nothing more, but he’ll keep fretting about it anyway.

Liam will pick up on Wyatt’s worries and push his brother to spill what’s wrong. He’ll want to help if he can, but Wyatt will be forced to admit Liam’s part of the problem. The Bold and the Beautiful spoilers say Wyatt will talk about Sally’s blunder and the doubts it’s left him with. He’ll probably suggest it took him back to times when he’s been stuck in miserable love triangles with Liam.

Like Liam, Wyatt’s been with Hope Logan (Annika Noelle) and Steffy Forrester (Jacqueline MacInnes Wood) before. Liam and Wyatt have done their fair share of fighting over women, so Wyatt doesn’t want to compete against Liam for Sally’s heart. B&B fans know Wyatt’s been down that road too much as it is.

Liam will insist he has no interest in Sally, but that won’t be the end of it. Wyatt feels insecure due to Sally’s potential lingering feelings. He’s struggling to get past the idea that Sally may not be 100-percent devoted to him. Even if nothing ever happens with Liam, Wyatt may always have to wonder if he’s Sally’s second choice – no matter what she claims.

Perhaps this introspection could lead Wyatt to consider his feelings for Florence “Flo” Fulton (Katrina Bowden) as well. Could he realize Sally may not be his first choice either? Wyatt may begin to feel like they’re both settling deep down. He’s just not as excited about this impending marriage as he should be.

The Bold and the Beautiful spoilers say Sally will do whatever she can to prove she loves Wyatt and only Wyatt. She’ll fight desperately to keep this engagement intact, but that could be tough – especially after Flo ultimately makes a comeback. We’ll give you updates as other B&B news emerges. Stay tuned to the CBS soap and don’t forget to check CDL often for the latest Bold and the Beautiful spoilers, updates and news.