BY hellodrdavis on August 10, 2019 | Comments: 2 comments
Related : Soap Opera, Spoiler, Television, The Bold and the Beautiful 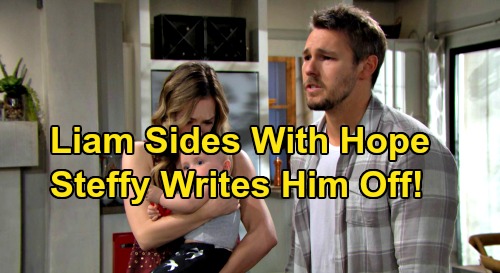 The Bold and the Beautiful spoilers tease that Hope Logan (Annika Noelle) and Steffy Forrester (Jacqueline MacInnes Wood) are in the middle of a huge standoff. As B&B viewers know, a distraught Steffy has just begun to wrap her head around the fact that the little girl she’s been raising as “Phoebe Forrester” is actually Hope and Liam Spencer’s (Scott Clifton) daughter Beth Spencer (River Davidson and Madeline Valdez).

Naturally, it will take Steffy some time to fully grasp the situation she’s in, and she’s really struggling to process what’s going down in her living room. Hope is standing there holding Beth, Brooke Forrester (Katherine Kelly Lang) is going on about how the adoption was illegal and Hope gets to have her baby back, and Liam is standing there looking horrified by the whole thing. So, what’s going to happen next?

Well, it certainly appears that Hope is going to walk out of Steffy’s house with Beth. From Hope’s perspective, this is HER daughter, and there’s no way she’s going to leave without her. And when it comes down to it, Liam is almost certainly going to agree with Hope, no matter how much it ultimately hurts Steffy.

It sure looks like the decisions that are made, and the sides that are taken, at Steffy’s house during this pivotal scene are going to have some serious ramifications for everyone’s relationships going forward. According to B&B spoilers, Brooke and Ridge Forrester (Thorsten Kaye) are going to experience some fallout from the sides they’re currently taking, with Brooke supporting Hope and Ridge supporting Steffy.

But what about the relationship between Steffy and Liam going forward? If Liam steps up and actively supports Hope’s desire to leave with Beth without the “transition period” that Steffy seems to want, then Steffy could very well turn on Liam. She’s been supportive of his relationship with Hope for a long time now, but she may not be able to forgive him for siding with her where Beth’s well-being is concerned.

From Steffy’s perspective, she’s clearly feeling the loss of her adopted daughter, but she’s also worried about the effect that suddenly going to a new home will have on Beth. Her maternal instincts are screaming to protect Beth, and she’ll probably be horrified that Liam isn’t siding with her on this issue.

It will be interesting to see what effect all of this will ultimately have on Steffy and Liam’s relationship going forward. Give that the two recently had a one-night stand, there’s obviously still some attraction between them, but this current standoff might just be the end of “Steam” as we know it. Steffy could very well decide that she’s done with Liam going forward after he leaves her with Hope and Beth, gutted and disgusted.

Sure, Liam will always be Kelly Spencer’s (Chloe Teperman and Zoe Pennington) father and he’ll always be a part of Kelly’s life, but Steffy might just decide that she’s done with Liam as a potential partner or full-time dad, no matter what ends up happening between Liam and Hope now.

In fact, Steffy might even get back to her “choosing me” mantra that she was all about several months ago. Do you think that Steffy will finally write Liam off for good now? Stay tuned to the CBS soap and don’t forget to check CDL often for the latest Bold and the Beautiful spoilers, updates, and news.