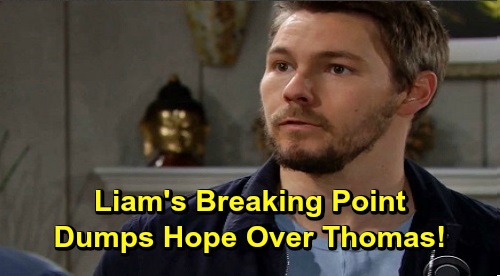 The Bold and the Beautiful (B&B) spoilers tease that Hope Logan (Annika Noelle) will keep drifting in Thomas Forrester’s (Matthew Atkinson) direction. Naturally, she won’t mean to. Hope probably won’t even realize she’s doing it, but Liam Spencer (Scott Clifton) will be more than willing to point it out. He’ll grow increasingly frustrated as Hope lets herself get manipulated by Douglas Forrester’s (Henry Joseph Samiri) father.

Thomas will use Douglas every chance he gets and will pull Hope closer at work, too. He’ll convince Hope to ditch her retirement plan and focus on building something special together a Forrester Creations. Thomas can have some serious charisma when he tries. He knows how to say all the right things and wear Hope down – especially when little Douglas is on board with his daddy’s plans.

Of course, Liam won’t think Hope should let a child dictate her decisions. Douglas is just a kid, so he’s naturally he’s going to fall for Thomas’ tricks and think he’s doing a great job. His desire to see Thomas and Hope as a couple could grow thanks to his dad’s influence. Thomas may even be able to turn Douglas against Liam if he puts a little extra work into it.

Regardless, Hope will put Douglas first and that’s bound to cause more friction. By putting Douglas first, Hope will automatically be putting Thomas above Liam. There’s just no way around that now that they’ve got this join custody arrangement.

Well, there could be a way around it if this were the real world, but this is The Bold and the Beautiful where drama reigns supreme! Hope just won’t be able to balance her life with Liam and Beth Spencer (River Davidson and Madeline Valdez) and her life with Thomas and Douglas. Blending those lives will be downright impossible since Liam and Thomas just can’t get along.

Will Liam eventually decide enough is enough? It seems likely there’ll be a breaking point for Liam, and it could happen quicker than B&B fans expect. There may come a time when Liam just has to dump Hope and move on. He may feel like their relationship is no longer a priority and worry that’s never going to change.