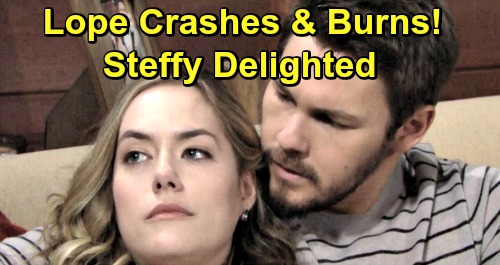 The Bold and the Beautiful (B&B) spoilers tease that Liam Spencer (Scott Clifton) will feel like Hope Spencer (Annika Noelle) is slipping away. They haven’t been having any major fights lately, but there are definitely some walls between them. Things just haven’t been the same since Beth Spencer “died,” so Hope and Liam are struggling to find a new normal.

Unfortunately, Hope seems to be finding her own new normal and leaving Liam out of it entirely. She’s been bonding with Douglas Forrester (Joseph Henry Samiri), which has truly touched Thomas Forrester’s (Matthew Atkinson) heart. B&B spoilers say that trend will continue, so more trouble’s brewing.

Liam doesn’t see Thomas as a threat to his marriage yet, but he certainly knows his relationship isn’t on solid ground. He understands he needs to fight, which is exactly what he’ll do. It could be tough as Hope tries to spend more and more time with Florence “Flo” Fulton (Katrina Bowden).

Flo will obviously resist bonding with Hope, even after Storm Logan (William deVry) is revealed as Flo’s father. However, Hope can be awfully persistent. She’ll throw herself into getting better acquainted with Flo, which could leave Liam feeling left out. If Hope spends all her time with Flo, Thomas and Douglas, where does that leave her husband?

Liam may worry that Hope is using any excuse she can think of to avoid him and the issues they’re facing. Of course, the idea of having another baby could come up again and cause additional problems. Hope is adamant that there’ll be no more pregnancies, but Liam seems convinced that’s the only thing that’ll help. Since Liam tends to believe he knows best, he could easily push Hope too hard on this.

During the week of April 15-19, The Bold and the Beautiful spoilers say Liam will put some real effort into saving his marriage. He’ll do everything in his power to save his relationship, but will it be enough? Can Hope and Liam really make it work without Beth? B&B is likely setting “Lope” up to fail, which means Steffy Forrester (Jacqueline MacInnes Wood) could come home to a shocking mess.

The Bold and the Beautiful spoilers hint that Steffy may find a very broken man waiting for her. Will she mend Liam’s broken heart? It’ll be a while before Steffy’s back on canvas, but the pieces are already moving into place for her inevitable return. Of course a part of Steffy will be delighted by Lope’s marriage mess since it leaves Liam available once again!

B&B viewers won’t want to miss the hot drama ahead. We’ll give you updates as other news comes in. Stay tuned to the CBS soap and don’t forget to check CDL often for the latest Bold and the Beautiful spoilers, updates and news.