BY Marcy Cohen on June 25, 2019 | Comments: one comment
Related : Soap Opera, Spoiler, Television, The Bold and the Beautiful 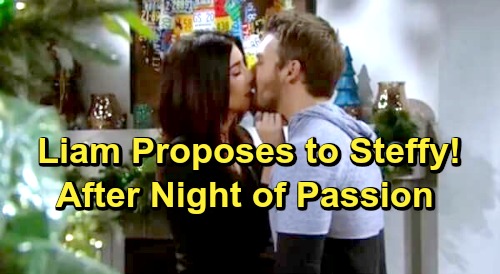 The Bold and the Beautiful (B&B) spoilers tease that Thomas Forrester’s (Matthew Atkinson) plan may work better than he ever imagined. He’ll recruit his old colleague, Vincent Walker (Joe LoCicero), for a painful plan. In Thomas’ mind, it’ll be for Hope Spencer’s (Annika Noelle) own good. Thomas will intend to drug Liam Spencer (Scott Clifton) and get this “Steam” reunion show on the road.

During the week of July 1-5, Thomas’ scheme will work like a charm. He’ll be pleased when Hope witnesses Liam’s strange behavior. Liam definitely won’t be acting like himself, so Hope will be quite taken aback. Let’s consider how this might play out.

First, we have to consider why Hope has a front-row seat for this. It’s possible Hope will drop by the house to visit “Phoebe Forrester” (River Davidson and Madeline Valdez) again, but there may be another explanation. Could Liam end up behaving this way at the Independence Day bash? B&B fans will recall that was a significant night for “Lope” last year. It’s when Hope revealed to Liam that she was pregnant.

Hope blurted it out to Liam as the fireworks blasted, but what if his attention is on Steffy this time? Will Liam propose to his former flame? Someone sure will! The Bold and the Beautiful spoilers state that a marriage proposal is coming up at the Fourth of July party, so we can’t rule drugged Liam out.

Of course, Thomas could always pop the question to Hope once more. We should also note that Wyatt Spencer (Darin Brooks) will ask Florence “Flo” Fulton (Katrina Bowden) to move in with him next week. There’s a chance Wyatt will later decide they should just make it official, but B&B might want to hold off on that step.

In that case, Liam could be a real contender here. If he’s out of it and feeling intense desire for Steffy, he could say anything and not realize it. The Bold and the Beautiful spoilers say Liam will try to put the puzzle together eventually. Once the drugs wear off, Liam will be pretty horrified by what he’s done.

That should include making love to Steffy, but what about before that? Could a proposal be what leads them to the bedroom? Whether Steffy’s willing to accept a marriage offer or not, her heart would be full. Liam might even have a hard time taking it back, especially since he won’t know he was drugged.