BY Heather Hughes on March 31, 2019 | Comments: one comment
Related : Soap Opera, Spoiler, Television, The Bold and the Beautiful 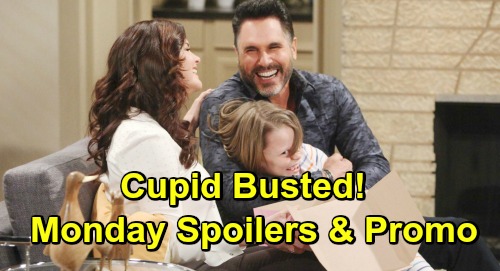 Brooke will feel like Taylor’s trying to pass on all their grudges. She’ll be convinced that Taylor wants to stir the pot until the end of time, so she’s targeting Hope as a way of carrying on their rivalry. Of course, Taylor will insist that’s not the case. She’ll simply think she’s doing what’s best for Steffy as well as Thomas Forrester (Matthew Atkinson).

Taylor will even argue that she’s looking out for Hope’s best interests here. She’ll try to make Brooke see that Hope and Thomas would be a better match. Taylor will wish Brooke would stop fighting Steffy and Liam Spencer’s (Scott Clifton) destiny, but Brooke will fire back. She’ll suggest that their kids are pieces on Taylor’s chessboard and nothing more. Brooke won’t think Taylor’s being helpful at all.

Ridge Forrester (Thorsten Kaye) will ultimately go easy on Taylor. He’ll urge his wife to cut Taylor some slack, which will leave Brooke enraged. It’s probably not the greatest idea to defend your ex when you’ve recently been caught kissing her!

Nevertheless, that’s exactly what Ridge will do. The Bold and the Beautiful spoilers say Brooke will feel like Ridge is putting his daughter above hers. That’s pretty understandable, but you can bet it’ll cause some B&B drama.

Over with Bill Spencer (Don Diamont) and Katie Logan (Heather Tom), they’ll get down to business. They’re growing increasingly curious about their matchmaker, so they’ll do whatever it takes to find out the truth. Katie and Bill don’t mind the mischief, but they still want to know who’s going to all this trouble. They’ll assume it must be someone who truly wants to see them happy and in love again.

Wyatt Spencer (Darin Brooks) and Justin Barber (Aaron D. Spears) will face a grilling session, but they’ll eventually be cleared. Katie and Bill will be left scratching their heads, but a big clue’s coming up. It’ll lead to the discovery that Will Spencer (Finnegan George) played cupid and pushed them together, so they’ll be tickled pink.