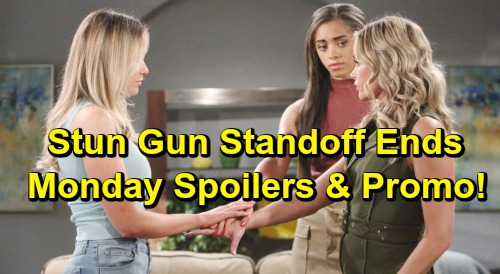 The Bold and the Beautiful spoilers for Monday, April 29, tease that Zoe Buckingham (Kiara Barnes) will be scared stiff. She’s just had a brawl with Florence “Flo” Fulton (Katrina Bowden) which resulted in Flo hitting her head on the coffee table and falling to the ground unconscious. Zoe was stunned, but then Shauna Fulton (Denise Richards) arrived at the apartment and things took a turn.

Of course, B&B viewers know that Flo was about to text Hope Spencer (Annika Noelle) to tell her that her daughter is alive. Hope’s guilt about participating in Reese Buckingham’s (Wayne Brady) baby swap and adoption scam is really starting to overwhelm her, and she wants nothing more than to honor her new Logan family and tell Hope and everyone else the awful truth.

Fortunately, B&B spoilers indicate that Flo is going to be just fine, and she’ll soon wake up and recover from her fall. But Flo will then have to deal with both Zoe and Shauna. Shauna feels just as strongly as Zoe about the need to keep the baby swap secret. So, Flo will probably have to endure a lecture from her mother when she wakes up.

Meanwhile, on the new episode of B&B on Monday, April 29, Thomas Forrester (Matthew Atkinson) will be up to more tricks. He smoothly arranged for Hope to insist that Liam Spencer (Scott Clifton) go to Paris to be with Steffy Forrester (Jacqueline MacInnes Wood), Phoebe Forrester (Isabella de Armes and Rosalind Aune), and Kelly Spencer (Chloe Teperman and Zoe Pennington). Now he’s got a captive audience in Hope, and he’s determined to make the most of it.

The Bold and the Beautiful spoilers say that Thomas will capitalize on Liam’s absence by making a subtle move on Hope. Chances are, he’ll use Douglas Forrester (Henry Joseph Samiri) in some fashion to tug at Hope’s heartstrings and to have an excuse to spend time with Hope. Or he may get closer to Hope at Forrester Creations.

Either way, look for more sneakiness from Thomas. He’s determined to break up Liam and Hope, and he’s off to a good start. One can only imagine how his plans will ramp up now that Liam is out of the picture and he’s got Hope’s attention all to himself.