BY hellodrdavis on August 9, 2019 | Comments: 3 comments
Related : Soap Opera, Spoiler, Television, The Bold and the Beautiful 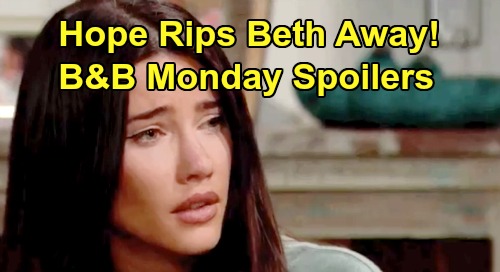 The Bold and the Beautiful spoilers for Monday, August 12, tease that Steffy Forrester (Jacqueline MacInnes Wood) will be feeling the terrible reality of the situation that she’s in. As B&B viewers know, Hope Logan (Annika Noelle) has just announced that she’s taking Beth Spencer (River Davidson and Madeline Valdez) home with her, and Steffy is completely gutted.

Of course, Steffy’s head may be starting to wrap itself around the fact that the little girl she’s been raising is Beth, but her heart doesn’t want to let go of her beloved “Phoebe Forrester.” Plus, her maternal instincts are kicking in and trying to protect “Phoebe” from being ripped away from the only home that she’s always known.

But despite how much Steffy begs and pleads for a lengthy transition process, it doesn’t look like Hope is going to budge from her position that Beth needs to go home with her, back to the cabin. Hope’s been separated from her daughter for months, and leaving her with Steffy at this point just isn’t an option.

Look for some gut-wrenching scenes on Monday’s episode, as Steffy is forced to come to terms with the idea that Hope’s not going to relinquish Beth, and that the little girl she’s been raising as her daughter is indeed going to be taken from her. Ridge Forrester (Thorsten Kaye) will be there to help Steffy through it, but it will absolutely break her heart to watch Hope walk out the door with Beth.

Meanwhile, on the new episode of B&B on Monday, August 12, Wyatt Spencer (Darin Brooks) will have some explaining to do. He’s just offered Sally Spectra (Courtney Hope) an apology for how he treated her after he learned about her secret with Thomas Forrester (Matthew Atkinson). As B&B viewers know, Wyatt dumped Sally after he found out that she knew about Thomas’ plot to break up Hope and Liam Spencer (Scott Clifton).

But Sally has yet to hear the details about what led Wyatt to seek her out and apologize. On Monday’s episode, look for Wyatt to fully fill in Sally on what Florence “Flo” Fulton (Katrina Bowden) has done. It will be a shocking story for Sally, as Wyatt fills her in on how his supposedly truthful and honest Flo lied about being “Phoebe’s” birth mom and hurt the people closest to him.

Sally will likely be shocked, as she probably figured that she had lost Wyatt forever. But now she may see a flicker of hope for a renewed future with Wyatt. That’s not to say that she and Wyatt will instantly get back together and everything will go back to the way it was, but perhaps they’ll be able to work their way back to the solid relationship they once had.