The Bold and the Beautiful Spoilers: Monday, August 26 – Dr. Armstrong Tries To Save Thomas’ Life – Brooke Blamed For Cliff Fall

BY hellodrdavis on August 23, 2019 | Comments: one comment
Related : Soap Opera, Spoiler, Television, The Bold and the Beautiful 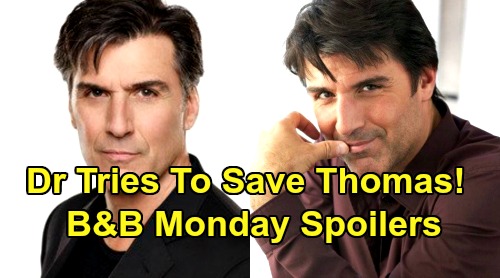 The Bold and the Beautiful spoilers for Monday, August 26, tease that Ridge Forrester (Thorsten Kaye) will be horrified at what he’s just seen. As B&B viewers know, Ridge arrived on the scene at the cliff house as Brooke Forrester (Katherine Kelly Lang) pushed Thomas Forrester (Matthew Atkinson) over the cliff. Brooke was trying to get Thomas away from Hope Logan (Annika Noelle), whom he was pleading with to hear him out.

Of course, it certainly didn’t seem like Brooke intended to push Thomas over the cliff; she was just trying to get him to stop manhandling Hope, who appeared to be in imminent danger. But from Ridge’s vantage point, and given the way that Brooke has been railing against Thomas lately, it looks like he’s going to jump to the conclusion that Brooke intended for Thomas to go over the bushes and down the side of the cliff.

But for the moment, Brooke, Ridge, and Hope will want to get to Thomas down at the bottom of the cliff and find out if he’s ok. It looks like they’ll all race down to Thomas’ location, and as Hope calls for help, Ridge will tend to his wounded son. From there, Thomas will be rushed to the hospital, where he’ll get emergency treatment for his very serious injuries.

Monday’s episode will mark the first appearance of Dr. Jordan Armstrong (Vincent Irizarry), so it looks like he’ll be on hand to tend to Thomas’ injuries. Thomas fell a long distance, so he’ll have life-threatening injuries. It’s going to be touch-and-go for a while, as the Forresters, Spencers, and Logans wait and wonder whether Thomas will survive.

Meanwhile, on the new episode of B&B on Monday, August 26, Bill Spencer (Don Diamont) will be feeling vengeful. He has been on edge since finding out about how Reese Buckingham (Wayne Brady) and Florence “Flo” Fulton (Katrina Bowden) deceived Hope and Liam Spencer (Scott Clifton). B&B viewers will remember that Bill had his own people out looking for Reese, but fortunately for Reese, the cops found him first.

Now that Reese and Flo are in custody, Bill will want to do everything in his power to make sure that the charges against them both stick and that there are no mistakes made that would allow either of them to go free on a technicality. He’ll might just try to talk with the DA and impress upon him or her just how important it is for Reese and Flo to be prosecuted to the fullest extent of the law.

It looks like Bill will be in full “don’t mess with a Spencer” mode as he vows that anyone who took part in keeping Beth Spencer (River Davidson and Madeline Valdez) from Hope and Liam will pay. And according to B&B spoilers, he’ll specifically turn his attention to Flo’s participation in the whole thing on Monday’s episode. He might be worried about Flo getting some sort of deal for providing testimony against Reese – something that could conceivably happen – and he could decide to work to make sure that doesn’t happen.

Ongoing B&B spoilers say that Bill will also soon turn his attention to Thomas and his involvement in keeping the Beth secret. Bill is going to be on a mission to make sure that every single person involved in not only keeping the Beth secret but in keeping Hope and Liam apart pay the price, so that means Thomas, too. B&B viewers should look for Bill to see justice any way he can – through the law or otherwise!