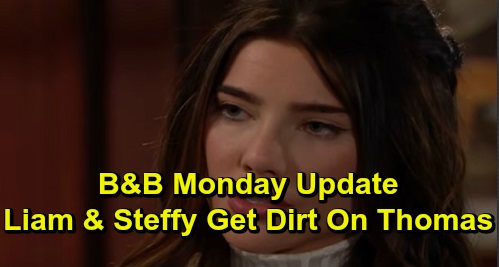 The Bold and the Beautiful (B&B) spoilers update for Monday, December 16, teases that Brooke Forrester (Katherine Kelly Lang) will refuse to throw in the towel. Things aren’t looking good now that the divorce papers have been signed, but Brooke feels like Ridge Forrester (Thorsten Kaye) is her destiny. She hates that they haven’t been able to work through their Thomas Forrester (Matthew Atkinson) issues, but she’ll hold out hope that Ridge will see the light.

Brooke has been firm in her stance on Thomas. She doesn’t think Thomas has changed at all – and she’ll count on Ridge understanding that soon enough. Brooke will feel confident that Thomas’ hidden agenda will be exposed eventually. She won’t think Thomas can fool Ridge forever, so she’ll try to stay strong until Ridge finds his way back to her.

In the meantime, Steffy Forrester (Jacqueline MacInnes Wood) will go along with Liam Spencer’s (Scott Clifton) plot. She was wary when she heard about this Thomas takedown scheme, but Liam suggested it was really about finding the truth. Of course, the truth could take Thomas down, so it’s essentially the same thing!

Nevertheless, Steffy will get on board and go with Liam to find Vincent “Vinny” Walker (Joe LoCicero). They’ll be surprised when they bump into Zoe Buckingham (Kiara Barnes) instead, but it turns out she’ll be even more useful. The Bold and the Beautiful spoilers say Liam and Steffy will explain their concerns about Thomas. They’ll grill Zoe about what she knows and hope she’s willing to cooperate.

Zoe’s starting to wonder if Thomas is going to come through on all his plans for the future. She might as well try her luck with Steffy, who has far more power at Forrester Creations. Besides, Zoe owes Liam and Steffy big time! She caused them a great deal of pain by joining the baby swap secret circle, so this is Zoe’s chance to undo a little of the damage.

B&B spoilers say Zoe will decide to spill what she knows. She’ll have lots of dirt she can dish out about Thomas’ continued obsession with Hope Logan (Annika Noelle). Zoe may also bring up Thomas’ desire to climb to the top at Forrester Creations. It doesn’t look like she’ll hold anything back, so Steffy and Liam should be appreciative.

That’ll set up the next phase of this scheme, which involves recruiting Zoe as a double agent. The Bold and the Beautiful spoilers say Liam and Steffy will make their pitch later this week, so stay tuned. We’ll give you updates as other B&B news comes in. Stick with the CBS soap and don’t forget to check CDL often for the latest Bold and the Beautiful spoilers, updates and news.