BY hellodrdavis on November 27, 2019 | Comments: one comment
Related : Soap Opera, Spoiler, Television, The Bold and the Beautiful 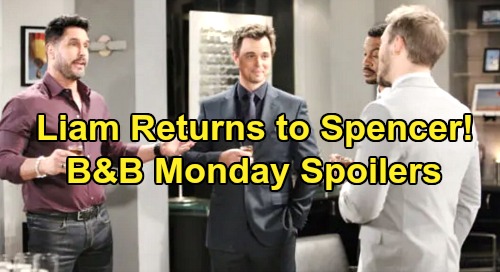 The Bold and the Beautiful spoilers for Monday, December 2, tease that things are really heating up on the show. But before we get to that, we have a programming note. B&B is currently scheduled to air an encore episode on Thursday, November 28 for the Thanksgiving holiday. Then, on Friday, November 29, B&B will be nationally preempted for football programming. So, the next new episode that viewers will see is on Monday, December 2nd.

On Monday, Ridge Forrester (Thorsten Kaye) will continue his conversation with Shauna Fulton (Denise Richards) at the Forrester mansion. As B&B viewers know, Shauna was feeling a little uncomfortable after Ridge went on about how much he loved Brooke Forrester (Katherine Kelly Lang). Even though he also professed that their marriage was over and done, he still referred to Brooke as the love of his life, which made Shauna rethink her level of closeness with Ridge.

But then Ridge apologized and asked Shauna to stay with him. The two had coffee and ultimately ended up kissing. And now it looks like Ridge and Shauna might find themselves in an interesting position. Clearly, they’re both attracted to each other and they would like something more, but is Ridge ready to take that step, is he falling for Shauna? After all, things have just ended with Brooke, and it seems a little quick to be moving on.

The Bold and the Beautiful spoilers say that Shauna will take Ridge by surprise with her understanding, so perhaps Ridge will turn down Shauna’s invitation for him to be with her. We’ll see what happens on Monday’s episode, but it looks like the two will at least kiss again, and it seems that Quinn Forrester (Rena Sofer) will spy their lip lock. According to ongoing B&B spoilers, Quinn will see a big smooch between the two and later want to hear all the details from Shauna.

Meanwhile, on the new episode of B&B on Monday, December 2nd, Liam Spencer (Scott Clifton) will report for his first day back to work at Spencer Publications. According to B&B spoilers, Bill Spencer (Don Diamont) will do his best to welcome Liam back into the family business. It will likely be an emotional moment for both Bill and Liam, who have been through a lot in the past year-and-a-half.

As B&B viewers will remember, Bill slept with Liam’s then-wife Steffy Forrester (Jacqueline MacInnes Wood), then later embarked on a plot to undermine their eventual reunion, which ended up pushing Liam back into Hope Logan’s (Annika Noelle) arms. It was a huge mess, and there was a substantial rift between Bill and Liam for many months. But the two seem to have gotten past their differences and now Liam feels comfortable enough to go back to work at Spencer.

According to B&B spoilers, Bill sill show a softer side of himself when welcoming Liam back to Spencer Publications. It will be a happy event, as Bill, Liam, Wyatt Spencer (Darin Brooks), Justin Barber (Aaron D. Spears), and Bill’s city hall connection Emmy (Sheryl Underwood) convene in Bill’s office for the big event. Look for some touching scenes as Liam and Bill feel healed and the three Spencer men are again together in business.