BY hellodrdavis on December 27, 2019 | Comments: one comment
Related : Soap Opera, Spoiler, Television, The Bold and the Beautiful 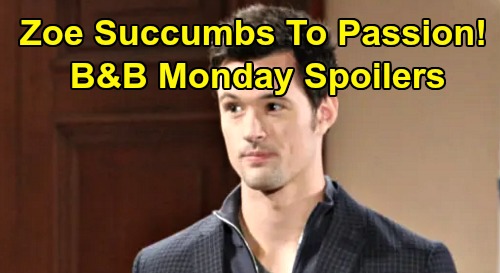 The Bold and the Beautiful spoilers for Monday, December 30, tease that Hope Logan (Annika Noelle) will give Liam Spencer (Scott Clifton) some surprising news. As B&B viewers know, Thomas Forrester (Matthew Atkinson) has just asked Hope to watch Douglas Forrester (Henry Joseph Samiri) so that he can spend the evening on a date with Zoe Buckingham (Kiara Barnes).

Of course, this is all a part of Thomas’ big manipulative scheme to get Hope to believe that he’s no longer obsessed with her. Thomas wants to continue working with Hope on her line for the big Forrester Creations fashion showdown, and he knows that the only way she’ll allow it is if she truly believes that he’s moved on with someone else and doesn’t want her anymore.

B&B viewers know that Thomas is indeed still obsessed with Hope, which is precisely why he wants to keep working closely with her at Forrester Creations. His hope is that as they work together, they’ll organically gravitate to each other. Thomas truly believes that with a little time, and through working together, Hope will eventually come around and see that she wants him and not Liam Spencer (Scott Clifton).

Well, on Monday’s episode, it looks like Hope and Liam will meet up at home after the long day, and Hope will share that they’re going to be watching Douglas for the night. That will prompt a discussion about why Thomas needed to have the whole evening free, and Hope will reveal to Liam that Thomas is on a date with Zoe…a date that might last overnight.

Of course, Hope doesn’t know that Liam’s got a scheme going with Zoe. As B&B viewers will remember, he’s secretly enlisted Zoe to spy on Thomas and find out whether he’s still obsessed with Hope. Zoe’s supposed to become Thomas’ confidante and therefore Liam’s eyes and ears on the inside. But Liam wasn’t exactly expecting Thomas and Zoe to embark on a romance in the process.

The whole thing may feel a bit uncomfortable to Liam, since he never expected for Zoe to get quite that close to Thomas on his behalf. Liam hasn’t shared his scheme with Hope, so she’s oblivious to the whole thing, but privately Liam will worry about Zoe losing perspective when it comes to the plan. After all, if Zoe develops real feelings for Thomas, then will she really be able to work against him for Liam?

One might think that Liam would be glad that Thomas is moving on with Zoe, but it looks like Liam won’t feel that way at all. He knows that Thomas is a master manipulator, and Liam will probably think that Thomas is setting up the romantic situation with Zoe in order to convince Hope that he’s moved on. And of course he’d be absolutely right about that.

Liam will probably start wondering exactly where his scheme stands now that Zoe is getting romantically involved with – and quite possibly manipulated by – Thomas. Zoe is really Liam’s only hope for finding out what’s really going on in Thomas’ mind, so he’ll be frustrated and worried about what this all means for his ability to “out” Thomas for who he really is.

Meanwhile, on the new episode of B&B on Monday, December 30, Zoe and Thomas will be having their romantic date at the Forrester mansion. As B&B viewers know, Thomas has been coming on pretty strong and laying the compliments on thick, all to get Zoe to move forward with their relationship as quickly as possible.

Of course, there’s likely a side of Thomas that’s attracted to Zoe, but mostly this is just a big ruse to reel Zoe in and get a new and serious relationship going for Hope’s eyes. The Bold and the Beautiful spoilers say that the ruse will work quite well, as Zoe gets caught up in passion as they’re on their date.

Thomas has quite a romantic scene set up at the mansion, complete with candles and champagne. As the two sit by the fire, Zoe will probably continue to fish for information about Thomas’ true feelings for Hope, but Thomas will have other things in mind. He’ll want to move forward and take their relationship to the next level, so look for him to really put the moves on Zoe, and for Zoe to ultimately give in to the passion.