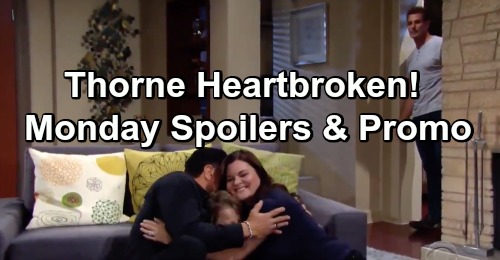 The Bold and the Beautiful spoilers for Monday, January 21, tease that Thorne Forrester (Ingo Rademacher) will do some reminiscing about his past. He has just endured a family dinner that included Bill Spencer (Don Diamont), Katie Forrester (Heather Tom), Will Forrester (Finnegan George), and Donna Logan (Jennifer Gareis). Thorne wasn’t keen on Bill being a part of the group, and the evening was quite uncomfortable for him.

Of course, it didn’t help that Will was very pro-Bill during dinner and had a lot of questions about how his mom and dad feel toward each other now. They were natural kid questions, but they made Thorne pause and notice just how close Bill, Katie, and Will seem to be getting lately.

On Monday’s episode, Bill, Katie, and Will are going to continue to enjoy each other’s company as Thorne watches from afar. It will really affect Thorne, and he won’t be able to help but think about his own past with his late wife Darla Forrester (Schae Harrison).

It’s been many years since Darla passed away, but watching Bill and Katie together will remind Thorne of the special connection he had with Darla. Of course, that may also cause Thorne to wonder whether he’s standing in the way of two people with their own special connection.

Meanwhile, on the new episode of B&B on Monday, January 21, Hope Spencer (Annika Noelle) and Liam Spencer (Scott Clifton) will continue to struggle with their devastating loss of Beth Spencer. Neither Hope nor Liam can make any sense of what’s happened, and they’re finding it difficult to relate to others, or even to each other.

Hope is especially despondent, and Liam doesn’t know what to do for her, other than to offer his love and support. But he’s deeply worried that she is closing herself off and on the path to shutting others out completely. She seems as if she’s falling into a deep depression, and Liam would like nothing more than to help her out of it, but he just doesn’t know what to do.