BY hellodrdavis on July 5, 2019 | Comments: one comment
Related : Soap Opera, Spoiler, Television, The Bold and the Beautiful 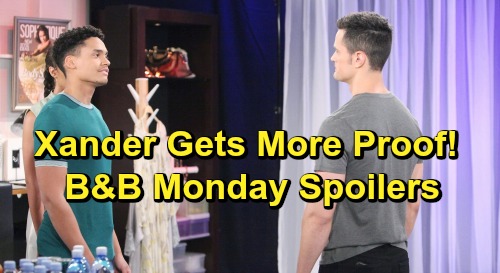 The Bold and the Beautiful spoilers for Monday, July 8, tease that Thomas Forrester (Matthew Atkinson) will continue his devious manipulation of Hope Logan (Annika Noelle). The two are alone in Hope’s cabin, where Thomas has just followed-up on Douglas Forrester’s (Henry Joseph Samiri) proposal to Hope with a proposal of his own.

As Hope stood there stunned, Thomas made a big pitch basically offering an opportunity for motherhood to Hope. And since Hope has vowed to never try to have any more children of her own, Thomas knows that this will be a very tempting offer for her. He knows that her maternal instinct is strong since losing Beth, and he’ll play on her hopes and dreams.

On Monday’s episode, it looks like Thomas will continue to lay it on thick to Hope. He’ll likely reiterate that Liam Spencer (Scott Clifton) has moved on with Steffy Forrester (Jacqueline MacInnes Wood) – which is a scenario that he orchestrated when he drugged Liam’s drink at the beach party. All of Thomas’ manipulations will culminate in this one big moment when he implores Hope to be his wife.

Well, ongoing B&B spoilers indicate that Hope will indeed say yes to Thomas’ proposal. But unbeknownst to her, there will be some drama playing out behind the scenes. At the main house, Brooke Forrester (Katherine Kelly Lang) and Liam have just learned from Douglas that Thomas cajoled Douglas into initiating a marriage proposal.

Brooke and Liam are livid about the situation, and they’ll want to barge in and expose the fact that Thomas used Douglas, but they’ll have an obstacle in their way…Ridge Forrester (Thorsten Kaye). According to B&B spoilers, Ridge will interfere with Liam and Brooke’s plan to interrupt Thomas’ proposal.

It seems that Ridge will prevent Liam and/or Brooke from going to the cabin and getting in the middle of things between Thomas and Hope. Ridge may argue that Liam has moved on and needs to let Hope live her life as she sees fit. Plus, Ridge will probably defend Thomas again. He just doesn’t see how manipulative his own son is!

Next, on the new B&B episode on Monday, July 8, Xander Avant (Adain Bradley) will increase his efforts in finding proof that Thomas murdered Emma Barber (Nia Sioux). As B&B viewers know, Xander just found surveillance tape evidence that Thomas followed Emma out of Forrester Creations on the night of her fatal accident.

Xander just knows that Thomas caused Emma’s accident, but unfortunately the evidence he uncovered hardly proves murder. According to B&B spoilers, he’ll increase his pursuit for evidence against Thomas. He’ll need some concrete proof, but where will he turn next? Thomas’ car’s GPS might be a good starting point – we’ll see if Xander goes there.