BY Heather Hughes on June 3, 2019 | Comments: one comment
Related : Soap Opera, Spoiler, Television, The Bold and the Beautiful 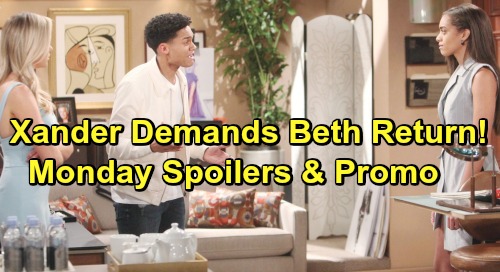 The Bold and the Beautiful (B&B) spoilers update for Monday, June 3, tease that Xander Avant (Adain Bradley) and Zoe Buckingham’s (Kiara Barnes) relationship will take a serious hit. Zoe just admitted that “Phoebe Forrester” (River Davidson and Madeline Valdez) is actually Beth Spencer, so Xander is definitely in freak-out mode. He just insisted that Hope Spencer (Annika Noelle) must be told the truth.

Zoe will explain why they simply can’t in Monday’s new B&B episode, June 3. Her reluctance to come clean will leave Xander even more furious. The Bold and the Beautiful spoilers say they’ll battle it out over what to do next. Zoe will warn about the consequences of confessing, but Xander will work to convince her it’s the only choice. He’ll try to make Zoe see that Beth belongs back with Hope and Liam Spencer (Scott Clifton).

Since Zoe will continue to put up a fight, it’ll leave Xander wondering if he really knows her at all. B&B fans know these two have faced some problems in their relationship, but Xander thought they worked through them. He eventually gave Zoe another chance, but this news will certainly change his perception of her.

Their relationship will be in a fragile state, but Xander will think the baby swap secret is the priority. He can figure out what to do about their crumbling romance later, but his goal right now will be nudging Zoe toward the truth. In the meantime, Thomas Forrester (Matthew Atkinson) will do a little nudging of his own. He’ll contend that Steffy Forrester (Jacqueline MacInnes Wood) needs to reunite with Liam.

Thomas will remind Steffy of all the amazing memories she’s made with Liam over the years. He’ll think they could make so many more if Steffy would just accept it’s what she wants. Thomas won’t think Steffy should hold herself back from the romantic future she deserves. He’ll feel like Steffy should do what’s best for not only the girls, but for herself.

The Bold and the Beautiful spoilers say Steffy won’t be ready to take that step, but she’ll indeed take a step of some sort. Steffy’s heart will be full as she remembers the good old days with Liam by her side. She’ll begin to wonder if Thomas is right, but she probably won’t tell him so. Nevertheless, Thomas will sense that he’s made progress in his mission to reunite “Steam.”

It sounds like Steffy’s on the verge of getting back together with Liam, so that could hit Hope harder than she expects. The Bold and the Beautiful spoilers say some gripping drama’s ahead, so stay tuned. We’ll give you updates as other B&B details emerge. Stick with the CBS soap and don’t forget to check CDL often for the latest Bold and the Beautiful spoilers, updates, and news.