The Bold and the Beautiful Spoilers: Monday, May 13 – Flo Plans Future with Wyatt – Liam Desperate to Save Marriage

BY Heather Hughes on May 13, 2019 | Comments: one comment
Related : Soap Opera, Spoiler, Television, The Bold and the Beautiful 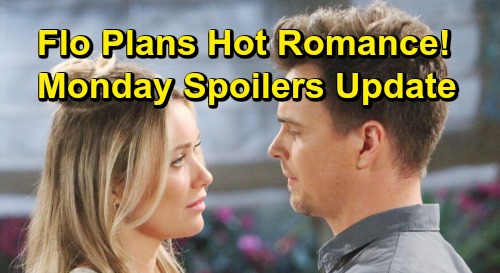 The Bold and the Beautiful (B&B) spoilers for the Monday, May 13, tease that Hope Spencer (Annika Noelle) will be overwhelmed as Liam Spencer (Scott Clifton) awaits her response. He just put her on the spot by asking her to be honest. Does Hope want to end her marriage and start a new life with Thomas Forrester (Matthew Atkinson)? Liam’s hoping the answer is no, and that’s surely the one he’ll get.

However, Hope will probably bring up the same old concerns. She doesn’t like standing in the way of Liam being a full-time dad. Hope knows Kelly Spencer (Zoe Pennington and Chloe Teperman) and “Phoebe Forrester” (Isabella de Armas and Rosalind Aune) deserve the world, so she wants them to have Liam as much as they need him.

Of course, Hope has also grown quite close to Douglas Forrester (Henry Joseph Samiri). She enjoys being a mother figure to the kid, so part of her will continue to wonder if Thomas is right. Nevertheless, Hope can fill that role without being Thomas’ main squeeze. She’ll likely assure Liam of her love and get his reassurance in return.

Liam will vow to rebuild anything that’s broken in their marriage. He’ll believe they can come back stronger than ever, so Hope will try to believe it, too. Unfortunately, Thomas’ manipulation won’t die down. He’s convinced that Hope would be better off with him, so he’ll keep finding opportunities to plant doubt and sabotage “Lope.”

Across town, B&B spoilers say Florence “Flo” Fulton (Katrina Bowden) will do something she hasn’t done in a while. She’ll actually start to relax. Wyatt Spencer’s (Darin Brooks) presence will be comforting as he discusses memories from their history together. Flo will pipe up with some of their own before they move to the future. Wyatt may admit he could see himself with Flo for the long haul.

The Bold and the Beautiful spoilers say Flo will finally be hopeful again. She’ll think maybe, just maybe everything’s going to be OK. Flo is usually a nervous wreck over the baby switch, so this will be new territory for her.

Naturally, it’s a mistake for Flo to let her guard down and she may realize that soon enough. Flo’s keeping a massive secret that’s caused great pain and will eventually cause even more. The Bold and the Beautiful spoilers say Flo and Wyatt will share some hot moments on Monday, but they’d better enjoy this budding reunion while it lasts!

It sounds like some terrific scenes are coming up. We’ll give you updates as other B&B news emerges. Stay tuned to the CBS soap and don’t forget to check CDL often for the latest Bold and the Beautiful spoilers, updates, and news.