The Bold and the Beautiful Spoilers: Monday, May 20 – Thomas Exploits Dead Caroline and Douglas To Get Hope, Break Up Lope

BY hellodrdavis on May 18, 2019 | Comments: Leave Comments
Related : Soap Opera, Spoiler, Television, The Bold and the Beautiful 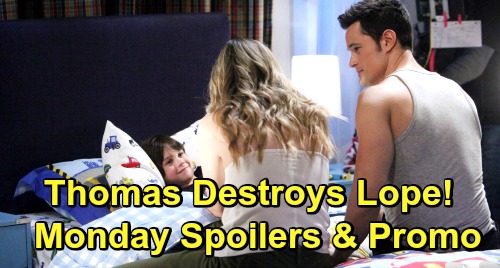 The Bold and the Beautiful spoilers for Monday, May 20, tease that Hope Spencer (Annika Noelle) will demand some answers. She’s just overheard Zoe Buckingham (Kiara Barnes) and Florence “Flo” Fulton (Katrina Bowden) arguing and talking about her daughter Beth Spencer. Flo and Zoe were having an argument about Flo’s decision to move into the Forrester mansion when Hope overheard them.

Now Flo and Zoe will be in a predicament. They’ll need to quickly come up with some cover story explaining why they were mentioning Beth in casual conversation, and why they appeared to be arguing over it. Since we know that this baby switch storyline is going to continue for a good while longer, it looks like they’ll be able to come up with an answer on the fly.

Perhaps Flo and Zoe will explain that they were just discussing Hope’s terrible loss and grief out of concern for her. They could say that they were arguing over whether Hope’s return to Forrester Creations was too soon, or something to that effect. Whatever they come up with, it looks like Hope will ultimately buy it.

Meanwhile, on the new B&B episode on Monday, May 20, Thomas Forrester (Matthew Atkinson) will take his manipulation of Hope to a whole new level. He previously told Hope that Caroline Spencer (Linsey Godfrey) wanted her to take care of Douglas Forrester (Henry Joseph Samiri) in the event of her death. Hope was touched, but the news didn’t quite pack the punch that Thomas had hoped.

So it looks like Thomas is going to finagle a situation so that Hope “sees” just how much Caroline wanted her to care for Douglas. A letter will come into play that Caroline allegedly wrote before her death in which she stated that she wanted Hope to take care of Douglas if she were to die. Now, whether this will be an authentic letter penned by Caroline or a fake one written by Thomas remains to be seen.

But whatever the true origin of the letter, it seems that Thomas is going to use it to try to persuade Hope that the two of them should join forces to raise Douglas together…just as Caroline wanted. It will be a devious and manipulative scheme, and it will poise Thomas to get exactly what he wants.