BY Heather Hughes on May 20, 2019 | Comments: one comment
Related : Soap Opera, Spoiler, Television, The Bold and the Beautiful 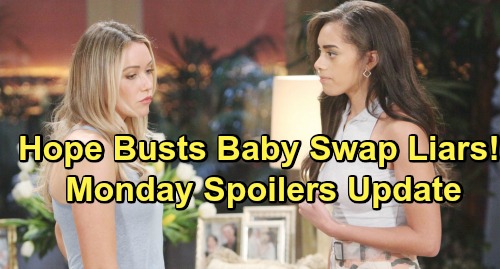 The Bold and the Beautiful (B&B) spoilers for Monday, May 20, tease that Hope Spencer (Annika Noelle) will remain baffled by what she just overheard. She was taken aback to find Zoe Buckingham (Kiara Barnes) and Florence “Flo” Fulton (Katrina Bowden) discussing her baby. Beth Spencer certainly isn’t a topic that Hope would’ve expected, so she’ll push for answers immediately.

Of course, this puts Flo and Zoe in a real bind. They can’t tell Hope the truth or they might land behind bars, but they have to tell her something. There’s no way Hope’s going to let this go, so Zoe and Flo will need a believable excuse. Since Flo’s a guilty mess most of the time, Zoe may have to take the lead on this. She’s a better liar out of the two of them, so she might have to step up.

Maybe Zoe and Flo can claim they were thinking of a plan to honor Beth. For example, they could fib about a special project that would help mothers who have lost children. Flo could pipe up about selling something special at Hope for the Future. They could donate all the proceeds to a specific charity in Beth’s name.

That probably won’t be the exact excuse, but the point is they can come up with something if they think on their feet. In fact, Hope may be deeply moved if they can spin this in a positive direction. That would naturally pile on the guilt for Flo! She already feels terrible for keeping Hope in the dark on her healthy baby. Doing something in memory of perfectly fine Beth would make matters worse.

Meanwhile, Thomas Forrester (Matthew Atkinson) will cross the line in a big way. B&B fans know Caroline Spencer (Linsey Godfrey) died suddenly not too long ago, which left Douglas Forrester (Henry Joseph Samiri) without a mom. Thomas is obsessed with Hope becoming Caroline’s replacement, but he wants her love most of all. He’ll make his creepiest move yet by exploiting Caroline’s death.

The Bold and the Beautiful spoilers say Hope will receive a special letter from Caroline soon, but we’re betting it won’t really be from her. This has Thomas written all over it, so he’ll likely manipulate the situation by sending a fake note. Thomas’ plan will push Hope toward a divorce later in the week, so he should be pleased with himself.