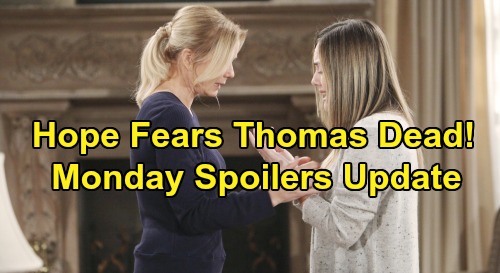 The Bold and the Beautiful (B&B) spoilers update for Monday, November 11, teases Hope Logan (Annika Noelle) will fear Thomas Forrester (Matthew Atkinson) has faced a grim fate. B&B fans know Hope tried to put some distance between them before she dashed away. Thomas went flying over the railing after Hope’s shove and plopped into the liquid-filled vat.

Was deadly acid still in that vat or was it possibly drained and replaced with water? No one knows for sure, but Hope will naturally assume the worst. Of course, Hope won’t want to believe Thomas is dead. She’ll go on the hunt in that industrial area and try to tell herself Thomas must still be around. Hope won’t even want to think about the alternative, but she’ll have to face the facts sooner or later.

The Bold and the Beautiful spoilers say Hope will come up empty-handed in her search for Thomas. She’ll determine the acid proved lethal and left Douglas Forrester (Henry Joseph Samiri) without a father. Hope wanted to get Douglas away from Thomas, but not like this! The poor kid already suffered a tragic loss earlier this year when Caroline Spencer (Linsey Godfrey) passed away.

Of course, Hope will feel responsible since her push led to this outcome. She’ll be spinning out as she tries to wrap her head around all this. It’ll be like a nightmare that Hope’s desperate to wake up from, but she’s wide awake and will have to deal with the aftermath. That means preparing to tell Brooke Forrester (Katherine Kelly Lang), who will ultimately urge Hope to keep quiet about Thomas’ demise.

However, Brooke will have to finish her faceoff with Ridge Forrester (Thorsten Kaye) first. There’s really not much point since they’re never going to get on the same page. Ridge is firmly on Thomas’ side while Brooke supports her daughter. She feels Thomas is still dangerous and wants him kept away Hope as well as Douglas. Ridge believes Thomas deserves another chance instead of this continued backlash.

B&B spoilers say Brooke and Ridge will reach a stalemate. They’ll figure out they’re not going to change each other’s minds, so they should just give it a rest. Ridge and Brooke’s marriage will be in worse shape than ever, but they just won’t know how to fix this. Neither one of them will be willing to budge.

It sounds like an exciting episode’s coming up. Is Thomas alive despite Hope’s conclusion? Will he return for vengeance eventually? The Bold and the Beautiful spoilers say some great twists and turns are brewing, so stay tuned. We’ll give you updates as other B&B news emerges. Stick with the CBS soap and don’t forget to check CDL often for the latest Bold and the Beautiful spoilers, updates and news.