BY Heather Hughes on November 14, 2019 | Comments: one comment
Related : Soap Opera, Spoiler, Television, The Bold and the Beautiful 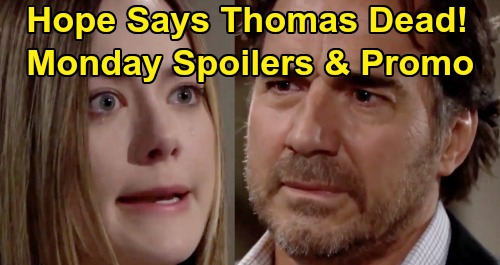 The Bold and the Beautiful (B&B) spoilers update for Monday, November 18, teases the action’s about to heat up. Before we dive in, we have a quick programming note to pass along. Due to impeachment hearings coverage, some preemptions are shaking up B&B’s schedule. It looks like the episode meant for Friday, November 15, will be bumped to Monday. Here’s what’s in store for this exciting show.

For starters, The Bold and the Beautiful spoilers say Hope Logan (Annika Noelle) will be adamant that she has to come clean. Hope will insist she can’t put Thomas Forrester (Matthew Atkinson) out of her head and just pretend nothing happened. She’ll argue that she’s already haunted by this and can’t keep it a secret.

Brooke Forrester (Katherine Kelly Lang) will do her best to reason with Hope on Monday. She’ll contend that she’s not asking Hope to lie. Brooke will just want her daughter to take some time and figure out her next move. He won’t think Hope can make rash decisions like this when there’s so much at stake.

However, Hope will counter that she can’t live like this. She’ll be terrified of losing Beth Spencer (River Davidson and Madeline Valdez) and Liam Spencer (Scott Clifton), but she just won’t think they can keep this under wraps. As scared as Hope is of landing behind bars, she’ll feel like the truth has a way of getting out. Hope won’t want this to eat away at Brooke’s marriage either, so she’ll argue that she has to tell Ridge Forrester (Thorsten Kaye) she killed his son.

Once Ridge comes stomping in, he’ll growl that he knows what Hope did. Ridge will wonder how Hope could do this to a little kid. He’ll be upset over Hope manipulating Thomas into signing the custody papers and making her Douglas Forrester’s (Henry Joseph Samiri) legal mother. Ridge will bark that Hope destroyed Thomas and Douglas’ relationship forever.

Brooke will refuse to let Ridge speak to her daughter like that, but Hope will pipe up that he’s right. She’ll feel like everything Ridge is saying is true – truer than he even realizes! Hope will be sorry she has to tell Ridge this, but she’ll think it needs to be said. The Bold and the Beautiful spoilers reveal that Hope will make her confession. She’ll insist that Thomas is dead!

Of course, that’s when Hope will snap out of it. There’s no way this is actually happening. B&B surely wants to keep this story going strong, so Brooke will cover for Hope after her horrific fantasy bubble bursts.

With Brooke backing her up, Hope will offer an edited version of the story. She’ll obviously leave out the part where she sent Thomas plunging into an acid bath. In fact, some parts of Hope’s story will begin to sway Ridge’s view. He’ll still think Hope’s manipulation was uncalled for, but he’ll see that Thomas wasn’t completely innocent in the matter.

Naturally, it could take a while for Ridge to wrap his head around Hope’s claims and admit Thomas needs help. Ridge will get there at some point though, so Hope and Brooke will just try to ride this out. They’ll do their best to keep Thomas’ presumed death under wraps, but it won’t be easy!

Meanwhile, we’ll see another sweet “Steam” moment. Liam Spencer (Scott Clifton) and Steffy Forrester (Jacqueline MacInnes Wood) have had some nice scenes lately, and there are more to come. That’s because they’ll make a pact in Monday’s episode.

Steffy and Liam will think it’s been good for the girls to hang out together. Kelly Spencer (Zoe Pennington) and Beth Spencer (River Davidson and Madeline Valdez) need to bond as sisters, and they’re off to a great start. Liam and Steffy will hope to build on that with more family time, which will include more co-parent connecting, too.

A “Steam” reunion seems to be brewing, so all this bonding as a fam could mean trouble for “Lope.” For now, Hope has bigger issues to worry about. It turns out Thomas survived and will soon come back with a vengeance! We’ll give you updates as other B&B news comes in. Stay tuned to the CBS soap and don’t forget to check CDL often for the latest Bold and the Beautiful spoilers, updates and news.