The Bold and the Beautiful Spoilers: Monday, November 25 – Thomas Reveals Himself To Stunned Brooke – Makes Her Come Clean To Ridge

BY hellodrdavis on November 22, 2019 | Comments: one comment
Related : Soap Opera, Spoiler, Television, The Bold and the Beautiful 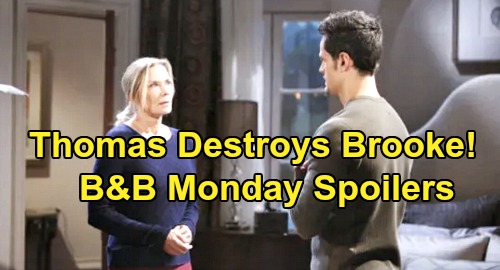 The Bold and the Beautiful spoilers for Monday, November 25, tease that Ridge Forrester (Thorsten Kaye) will get some shocking news. As B&B viewers know, Brooke Forrester (Katherine Kelly Lang) decided on her own to come clean with Ridge about what happened to Thomas Forrester (Matthew Atkinson). She’s currently under the belief that Thomas died after falling into a vat of hydrofluoric acid, and she doesn’t yet know that he’s really alive.

In the initial hours after Thomas’ supposed death, Brooke urged Hope Logan (Annika Noelle) to keep the whole thing a secret. Since Hope had pushed Thomas into the vat, Brooke was afraid that Hope might be implicated for murder, even though the whole thing was actually an accident. Brooke even stopped Hope from telling Ridge about what had happened, and in so doing withheld crucial information from Ridge.

Well, The Bold and the Beautiful spoilers say now Brooke will be ready to come forward and tell Ridge the truth about the accident and about Thomas falling into the acid and dying. She’ll appear at the Forrester mansion to see Ridge and bite the bullet. But it seems that before she’s able to confess everything to Ridge, Thomas will appear on the scene. As B&B viewers know, Thomas has just revealed himself to Hope, so perhaps he and Hope will show up at the mansion together.

Whatever the case, B&B spoilers say that Thomas will confront Brooke and taunt her to come clean with Ridge. He’ll have figured out, after getting information from Hope, that Brooke knew about his accident but kept it from Ridge. And that’s absolutely golden for Thomas, since he’s always looking for some way to drive a wedge between Brooke and Ridge. He’ll probably behave in such a way as to make it seem that Brooke is only coming clean because she was caught.

B&B viewers should see a major moment when Brooke comes face-to-face with Thomas. She’ll surely be shocked to see him alive, and probably quite angry that he kept his survival a secret from her and Hope. But what’s Brooke really going to say at this point? She can’t get too upset about secret-keeping on Thomas’ part after she kept such a doozy of a secret from Ridge!

Ridge will probably be quite confused as he watches Brooke face off with Thomas, and then listens to Thomas needle Brooke about coming clean. He’s absolutely not going to be prepared to hear Brooke’s eventual confession, and according to ongoing B&B spoilers, he’ll ultimately leave Brooke over what she’s done. He just won’t be able to stomach the idea of his wife keeping his son’s death from him.

Other spoilers for the new B&B episode on Monday, November 25 indicate that Shauna Fulton (Denise Richards) will be a source of support for Ridge when Brooke is not. Now, whether that means that Shauna will be present for Thomas’ big reveal to Brooke remains to be seen. Something tells us that she will probably skedaddle out of the Forrester living room before Brooke arrives.

But Shauna might offer Ridge some more moral support before Brooke arrives. Of course, Brooke has no idea about how much time Ridge and Shauna have been spending together, or the key role that Shauna’s been playing in comforting Ridge while Brooke refuses to do so. Shauna seems to be playing her cards just right – she’s very attracted to Ridge but she hasn’t been too pushy or aggressive in pursuing him.

At any rate, it looks like we’re in for an explosive B&B episode on Monday, so stay tuned! We’ll give you updates as B&B news comes in. Stick with the CBS soap and don’t forget to check CDL often for the latest Bold and the Beautiful spoilers, updates, and news.