BY Heather Hughes on November 1, 2019 | Comments: one comment
Related : Soap Opera, Spoiler, Television, The Bold and the Beautiful 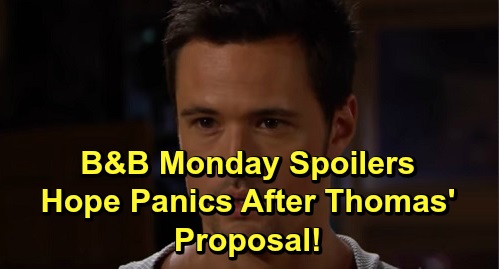 The Bold and the Beautiful spoilers for Monday, November 4, tease that Hope Logan (Annika Noelle) will find herself in a real bind. As B&B viewers know, she’s just been propositioned by Thomas Forrester (Matthew Atkinson). He agreed to allow Hope to adopt Douglas Forrester (Henry Joseph Samiri) if Hope agreed to make love and stay the night with him. Hope was of course horrified by the turn of events, since she’s only been nice to Thomas as a ploy to wrangle custody of Douglas from him.

On Monday’s episode, Hope will do some scrambling as Thomas waits for an answer. In a way, he’s really calling her bluff, and she’ll know it. But the last thing she wants to do is sleep with Thomas, so she’s going to need to find a way out of this, and fast. Her flirty ruse won’t really help her now, and she’s going to have to think quickly to somehow get out of sleeping with Thomas while still saving her chances of adopting Douglas.

Well, since ongoing B&B spoilers indicate that Hope will still be vying to adopt Douglas in the days to come, it looks like something or someone will interrupt Thomas’ attempt to seduce Hope. Perhaps Douglas will come along and break up their conversation, or even Ridge Forrester (Thorsten Kaye) could come along and want to talk with Thomas. At any rate, it looks like the game between Thomas and Hope will continue from here.

But one wonders whether Thomas will pick up on Hope’s hidden revulsion at the idea of sleeping with him. So far, it’s seemed as though Thomas has been falling for Hope’s ruse and that he’s actually considering signing the papers to allow Hope to adopt Douglas. But something tells us that he may catch onto her plot, if he hasn’t already, and start to manipulate her right back.

Meanwhile on the new episode of B&B on Monday, November 4, Liam Spencer (Scott Clifton) will get a shocker. He’ll discover that Steffy Forrester (Jacqueline MacInnes Wood) has begun dating again, and it will really throw him for a loop. As B&B viewers know, Steffy and Liam have just spent a special night together with Kelly Spencer (Zoe Pennington) and Beth Spencer (River Davidson and Madeline Valdez). They’ve been acting like true, loving co-parents and have renewed their bond.

Of course, it wasn’t that long ago that Steffy asked Liam if there was a chance they could “do this again,” which presumably meant be a couple again. Interestingly, B&B viewers weren’t shown Liam’s answer or the resolution to that conversation, but given how Steffy and Liam have been acting toward each other lately, it seems that they’re not on any sort of road back together. Rather, Liam’s still living with Hope as a couple.

Still, B&B spoilers are clear that Liam will be unnerved by the revelation that Steffy has chosen to date. But why? Surely he doesn’t think that she’s going to be single forever or wait around for him. Perhaps the news will just come as a surprise because Steffy hasn’t mentioned dating or wanting to date before, and it will seemingly come out of nowhere.

Or perhaps Liam will be unnerved because of the possible influx of a man/men into Steffy’s home where Kelly is living. At any rate, it seems like Steffy and Liam will need to have a talk about the situation. Steffy might remind Liam that she has every right to see whom she chooses and to go out and have some adult companionship. And in the end, Liam will probably come around and realize that dating will be good for Steffy – the idea just might take a little getting used to.