BY Heather Hughes on October 21, 2019 | Comments: one comment
Related : Soap Opera, Spoiler, Television, The Bold and the Beautiful 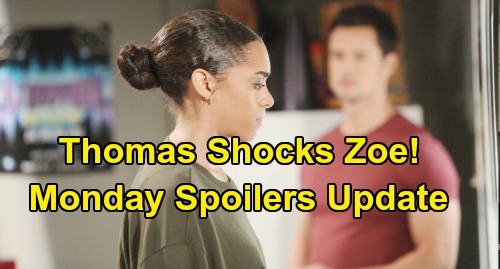 The Bold and the Beautiful (B&B) spoilers update for Monday, October 21, teases that Steffy Forrester (Jacqueline MacInnes Wood) will gain a startling advantage. B&B fans know a confrontation is underway between Steffy and Hope Logan (Annika Noelle). Since Liam Spencer (Scott Clifton) arrived and got in the middle of the drama, he’s now facing a difficult dilemma.

Hope wants Liam to make things crystal clear for Steffy and finally put all this to rest. She tried to insist that she’s Liam’s future, not Steffy. However, Hope’s counting on Liam to tell Steffy himself. The Bold and the Beautiful spoilers say Liam’s hesitation will bother Hope, but she’ll just keep revving up the pressure. Liam will ultimately make a declaration, but it won’t be the one Hope was expecting.

Since Liam shares Kelly Spencer (Zoe Pennington) with Steffy and plans to keep Beth Spencer (River Davidson and Madeline Valdez) in her life too, Steffy is always going to be his future. Liam may argue that Hope’s looking at this the wrong way. He can be committed to Hope romantically and still have Steffy be part of the big picture. Liam won’t want Steffy thinking he’s just going to abandon her.

In other words, Hope is indeed Liam’s future, but so is Steffy. Liam may not be willing to sacrifice one or the other, no matter how Hope wants him to frame this. They’re all connected through the girls and need to come together as a family – at least that’s probably what Liam will argue.

The Bold and the Beautiful spoilers say Liam’s answer won’t be exactly what Steffy wants to hear, but she’ll take it! Much to Hope’s chagrin, Steffy will likely cling to hope for a “Steam” reunion. Since Liam will apparently refuse to get too firm with Steffy, Hope will feel like the message just isn’t being sent.

Nevertheless, Hope will eventually suck it up and move on. This war with Steffy isn’t over, but they can’t keep going in circles all day. Hope will deal with Steffy’s momentary upper hand and enjoy the fact that Liam’s coming home with her. She may think that makes her the real winner, but we’ll see where the story goes from here.

Other Bold and the Beautiful spoilers say Thomas Forrester (Matthew Atkinson) will gush over his muse. He’ll tell Zoe Buckingham (Kiara Barnes) she’s inspired some gorgeous designs, so she’ll be both flattered and wary. Once Thomas explains his plans, he’ll explain how Zoe fits into the puzzle. Thomas will have some good ideas on how to send their careers soaring to new heights.

Zoe will have some trust issues, but Thomas will think they can make quite a splash. He’ll likely pitch how she can stage a Forrester Creations comeback and take the fashion world by storm. If Zoe pledges her loyalty and helps Thomas rid the Forresters of the Logans, perhaps she’ll find herself back on the runway.

It sounds like some fantastic scenes are coming up. We’ll give you updates as other B&B news emerges. Stay tuned to the CBS soap and don’t forget to check CDL often for the latest Bold and the Beautiful spoilers, updates and news.