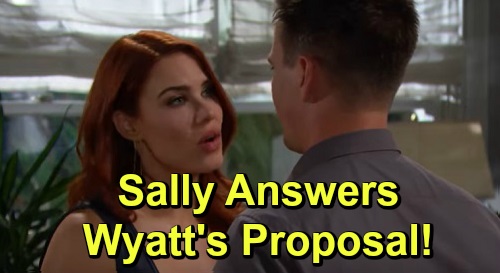 The Bold and the Beautiful (B&B) spoilers update for Monday, September 23, teases that Sally Spectra (Courtney Hope) will have a dilemma on her hands. She loves Wyatt Spencer (Darin Brooks) and truly wants another chance to make this work. At the same time, Sally’s wary of diving right in and getting her heart broken. She needs to see that Wyatt can offer her a true commitment.

Of course, Sally didn’t mean for Wyatt to drop to one knee and propose, but that’s exactly what he did! Wyatt’s desperate to prove his love – both to Sally and to himself. Part of Wyatt is still drawn to Florence “Flo” Fulton (Katrina Bowden), so he’s dealing with some confusing feelings right now. Even so, Wyatt doesn’t want to lose Sally and that’s why he wanted to make this daring gesture.

Naturally, Sally will be skeptical in Monday’s B&B episode. She’ll question Wyatt’s motives and drag her feet on accepting this offer of marriage. However, Wyatt will assure Sally that she’s the girl for him. He’ll want Sally to believe they’re meant to be, so he’ll make a passionate speech and hope it pays off.

Sally may need some time to mull things over before she agrees to take this step. It’s a major decision that’ll affect her life in a big way. Sally was already concerned about moving too fast and now Wyatt’s pushing even harder. She’s bound to feel pretty overwhelmed, so we’ll see how she handles Wyatt’s shocking move.

Meanwhile, Bill Spencer (Don Diamont) will make a passionate speech of his own. The Bold and the Beautiful spoilers say Katie Logan (Heather Tom) will be in the hospital following her sudden collapse. She’ll be stable for the moment, but she’ll still be unconscious.

Bill will use this opportunity to tell Katie all the things he should’ve said before. He’ll make it clear just how deep his love runs and count on her to survive. Unfortunately, Bill will get some terrible news later this week. He’ll learn both Katie’s kidneys are failing, so she’ll need a transplant as soon as possible. If Katie can’t find a match quickly, she isn’t going to make it.