BY Amanda Austin on September 27, 2019 | Comments: Leave Comments
Related : Soap Opera, The Bold and the Beautiful 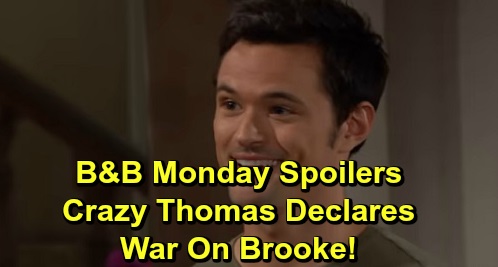 The Bold and the Beautiful spoilers for Monday, September 30, tease that Thomas Forrester (Matthew Atkinson) will be feeling emblazoned. As B&B viewers know, he just had an epic fight with Brooke Forrester (Katherine Kelly Lang) at the mansion. Things got pretty heated, and Brooke hauled off and slapped Thomas when he got in her face and called her out on breaking up his family when he was younger. Brooke tried to take a hard line with Thomas and throw him out, but Thomas stood firm and refused to be ordered around by the likes of a Logan.

Well, after that battle, Thomas will be feeling pretty raw. According to B&B spoilers, he’ll want to rid himself and the Forrester family of the Logans for good. He’ll officially declare war on the Logans, and on Brooke in particular, and he’ll start looking for ways to fracture his dad’s marriage with Brooke. And as it turns out, that won’t be too difficult to do. After all, the relationship between Brooke and Ridge Forrester (Thorsten Kaye) is already weakened and vulnerable.

Plus, there will be some new intel on the horizon for Thomas that he’ll be able to eventually use to cause problems between his father and Brooke. As B&B viewers know, Thomas’ friend Vinny Walker (Joe LoCicero) just learned from Danny the bartender (Keith Carlos) that Ridge recently spent the night with Shauna Fulton (Denise Richards). Danny revealed to Vinny that Ridge and Shauna both slept in the same bed that night, and Vinny immediately texted Thomas to come hear the story.

It seems that Thomas will be quite happy to know about his dad’s night with Shauna. He’ll know that, regardless of whether anything actually happened between Ridge and Shauna, it’s information that will absolutely outrage Brooke and cause problems in “Bridge’s” marriage. Ongoing B&B spoilers indicate that Thomas will eventually use this information to his advantage in his plan to rid his family of Brooke.

Meanwhile, on the new episode of B&B on Monday, September 30, Shauna will make a big promise to Ridge. She and Ridge have been talking at Forrester Creations, and they’ve actually been getting along quite well. Shauna has been a source of support for Ridge here recently, in stark contrast with the role that Brooke has been playing in his life. Shauna has been listening patiently to Ridge’s woes, and she actually seems to hear him in a way that Brooke just can’t right now.

Well, it seems that the two will continue their conversation, and Shauna will pledge to be there for Ridge if Brooke can’t be – or won’t be. It’s a risky game that Shauna’s playing, but so far it appears to be working, and Ridge will apparently appreciate Shauna’s gesture. He seems to be tired of the same old routine with Brooke – talking, broaching delicate subjects, having disagreements, then making up. He just seems to crave an easy person to talk to right now, and Shauna’s taking that role.