BY hellodrdavis on September 6, 2019 | Comments: one comment
Related : Soap Opera, Spoiler, Television, The Bold and the Beautiful 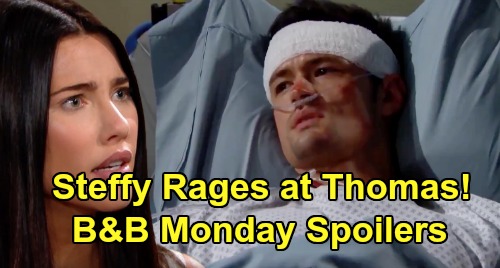 The Bold and the Beautiful spoilers for Monday, September 9, tease that Steffy Forrester (Jacqueline MacInnes Wood) will finally pay a visit to her brother, Thomas Forrester (Matthew Atkinson). B&B viewers haven’t seen Steffy on screen since the big reveal was made about her adopted daughter being Beth Spencer (River Davidson and Madeline Valdez). At the time, Steffy was absolutely gutted and she’s presumably been spending her time with Kelly Spencer (Chloe Teperman and Zoe Pennington) and just trying to move on with life without Beth.

And as far as B&B viewers know, Steffy hasn’t been to visit Thomas since his fall from the cliff at her house. Of course, Steffy wasn’t present at the time of his fall, and so it doesn’t appear that she’s had any contact with him since he’s recovered from his injuries. From Steffy’s perspective, she’s probably been too upset to go see her brother, since she knows that he helped perpetuate the secret about Beth’s existence.

On Monday’s B&B episode, Steffy will finally go to see her brother, and chances are she’ll have very mixed feelings about that. On the one hand, she’ll be glad that Thomas survived his fall from the cliff, since he could very well have been killed. But on the other hand, she’ll be furious with him for keeping the secret about “Phoebe Forrester” being Beth. And she’ll probably be incredulous that her brother could have been involved in Emma Barber’s (Nia Sioux) fatal accident.

Chances are, things will start out civil between Steffy and Thomas, but according to B&B spoilers, things will soon turn contentious. Steffy hasn’t had the chance to vent yet – in fact, it seems that she’s just been grieving alone over her loss of “Phoebe” – but it seems that once she gets started railing against Thomas, it’s going to get ugly. She’ll rage against her brother for the harm that he’s caused, and he probably won’t have much to say in response. He’ll really have no choice but to take it, since she’ll be 100% justified in her anger.

Meanwhile, on the new episode of B&B on Monday, September 9, Ridge Forrester (Thorsten Kaye) will find himself in an interesting position. According to B&B spoilers, he’ll find himself unexpectedly holding the keys to both Thomas’ and Flo Fulton’s (Katrina Bowden) futures. This may have something to do with the story that Thomas just told his father about his actions with respect to Emma’s fatal car accident.

As B&B viewers learned on Friday’s episode, the police have examined Thomas’ car, but Thomas erased the GPS tracking history from the system after Xander Avant (Adain Bradley) initially made an outcry against Thomas regarding Emma’s death. So now, both Thomas and Ridge know that Thomas chased Emma then stopped but didn’t offer her assistance. Could Ridge wind up withholding that information from the police?

That might be the case, but B&B spoilers also say that Ridge will hold the keys to Flo’s future as well, so what could this mean? Viewers will have to tune in on Monday to find out, but ongoing spoilers indicate that Ridge will indeed strike some sort of deal with Detective Alex Sanchez (Jeremy Ray Valdez) that will ultimately free Flo and get both her and Thomas off the hook for what they’ve done.

Of course, none of this is going to go over well with Brooke Forrester (Katherine Kelly Lang), who is hoping and praying that Thomas ultimately gets what he deserves for his actions, and Flo as well. Look for some serious problems to develop between Ridge and Brooke as a result of the deal he strikes with Detective Sanchez – problems that will result in some serious marital difficulties for the two.