The Bold and the Beautiful Spoilers: New Beth Reveal Details – Thomas Punches Liam and Escapes Before Hope and Steffy Fallout 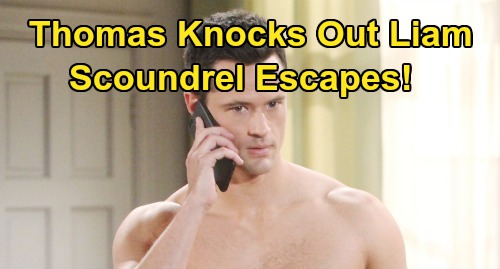 The Bold and the Beautiful (B&B) spoilers tease that there are some new details to pass along about the big Beth Spencer reveal. This is obviously a huge deal for B&B, so we want to make sure you know all the latest information. There are some additional shockers coming out about the showdown between Thomas Forrester (Matthew Atkinson) and Liam Spencer (Scott Clifton).

After Thomas and Hope Forrester (Annika Noelle) return from their tense honeymoon, they’ll arrive at Forrester Creations. It won’t be long until Liam makes his way over as well. He’ll be armed with the stunning truth thanks to all the clue he’s put together. Florence “Flo” Fulton’s (Katrina Bowden) confession will give Liam some backup evidence as he prepares to tell Hope everything.

The Bold and the Beautiful spoilers say Liam will start spilling the Beth story to Hope, but he’ll be interrupted before he can truly explain. Thomas will become enraged and decide he has to put a stop to this. He’ll rush over and hit Liam, so the force of the blow should take Liam down briefly.

Thomas will have plenty of anger surging out of him, which means Liam should take a ridiculously hard punch. Once Thomas makes this aggressive move, he’ll force Hope up to the roof with him.

B&B spoilers say Thomas might call for the Forrester jet or make some other desperate attempt to keep his marriage intact. He’ll be fighting a losing battle thanks to Liam’s fierce determination.

Before Thomas can do anything else, Liam will race up to the roof as well. The Bold and the Beautiful spoilers say Liam will blurt out that Beth is alive, so Hope will finally get the relief she’s been waiting for. Liam will begin to tell Hope how “Phoebe Forrester” (River Davidson and Madeline Valdez) is actually their daughter – and Thomas knew the truth.

However, Thomas will opt to bolt before it’s too late. He’ll worry about the backlash he’ll be facing, so Thomas will do his best to escape the consequences of his actions. The Bold and the Beautiful spoilers say Thomas will flee, but how far will he get? Will he just disappear and be left out there as a threat that could return soon? Will someone catch up with Thomas instead?

Regardless, Thomas will want to avoid Hope and Steffy Forrester’s (Jacqueline MacInnes Wood) fury! The Bold and the Beautiful fans won’t want to miss all the hot drama. We’ll give you updates as other B&B news comes in. Stay tuned to the CBS soap and don’t forget to check CDL often for the latest Bold and the Beautiful spoilers, updates and news.