The Bold and the Beautiful Spoilers Next 2 Weeks: Brooke & Ridge End Marriage – Hope’s Admission to Liam – Thomas’ Moment To Strike 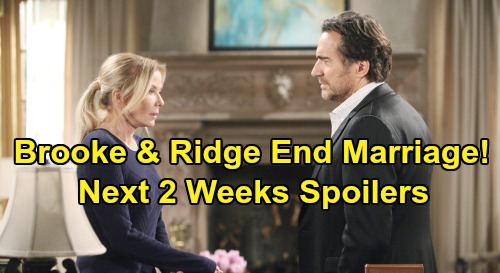 The Bold and the Beautiful (B&B) spoilers for the next two weeks tease that things are about to heat up on the CBS soap. During the week of November 18-22, Hope Logan (Annika Noelle) will tell Brooke Forrester (Katherine Kelly Lang) her secret is haunting her. She’ll feel like the truth’s going to come out anyway, so she might as well give Ridge Forrester (Thorsten Kaye) the real story herself.

Brooke will want Hope to take a step back and wait until she can make a rational decision. She’ll think Hope’s far too upset to be making life-altering choices. However, Hope will end up telling Ridge that Thomas Forrester (Matthew Atkinson) is dead. This seems to be a fake-out fantasy or something Brooke can play off as an overreaction. We know Brooke will help out with a cover story in the following episode.

Later, Hope will struggle to give Ridge a reason for Thomas’ vanishing act. She was the last one to see him, so she’ll have to come up with something. With Brooke’s guidance, it appears they’ll settle on Thomas’ indecent proposal as the excuse. Thomas pushed Hope to make love to him in exchange for signing the custody papers, so that news will leave Ridge reeling.

Ridge will explain the situation to Steffy and leave her unsettled as well. They’ll want to get in touch with Thomas, but Ridge will fear that a search is futile. He’ll talk to Shauna Fulton (Denise Richards) and confess that he may have lost Thomas for good. Ridge might feel like Thomas isn’t willing to seek the help he needs and would rather just abandon Douglas Forrester (Henry Joseph Samiri).

Fortunately, Thomas will make a shocking comeback soon after. He’ll pay Hope a frightening visit, but she’ll certainly be relieved that he’s still alive. The Bold and the Beautiful spoilers say Thomas will ridicule the Logan women for how they’ve handled this. He’ll take jabs at both Hope and Brooke before urging Brooke to tell Ridge what she’s hiding.

While Brooke and Ridge have a nightmare of a showdown, Hope and Thomas will share some big updates with Douglas. The kid will be overjoyed to learn Mommy Hope is his official mommy now. During the week of November 25-29, Brooke will speak with Hope and Liam Spencer (Scott Clifton) about that showdown we mentioned. She’ll reveal the end of her marriage, so Liam’s going to have questions.

Hope will try to answer those questions by spilling what went down at Forrester Creations. She’ll come clean about the events of that night, but it’s not entirely clear if she’ll divulge every last detail. That’s because things will seem pretty normal once Thanksgiving rolls around. Liam and Hope will have a good time helping Beth Spencer (River Davidson and Madeline Valdez) celebrate her first turkey day.

Douglas will join in the “Lope” holiday fun eventually, so Thomas may be waiting on the perfect moment to strike. He surely can’t get behind this happy blended family idea – not when Hope manipulated him into signing the custody papers and tried to cover up his “death.”

As for Ridge, he’ll let Shauna know his marriage is over and get a sympathetic ear. Shauna will show Ridge he’s got a friend in her…or more depending on what he wants. Ridge is clearly attracted to Shauna and appreciates her support, so it may not be long until a new romance begins.

It sounds like the next two weeks will bring some exciting scenes. We’ll keep you posted as other B&B details emerge. Stay tuned to the CBS soap and don’t forget to check CDL often for the latest Bold and the Beautiful spoilers, updates and news.