The Bold and the Beautiful Spoilers Next 2 Weeks: Hope Begs Steffy For Help With Liam – Wyatt and Guilty Flo Bring the Heat

BY Heather Hughes on May 18, 2019 | Comments: 5 comments
Related : Soap Opera, Spoiler, Television, The Bold and the Beautiful 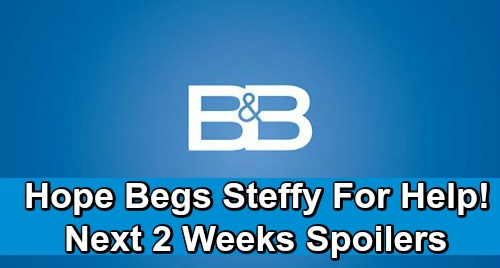 The Bold and the Beautiful (B&B) spoilers for the next two weeks tease that big drama’s brewing. During the week of May 20-24, Zoe Buckingham (Kiara Barnes) and Florence “Flo” Fulton (Katrina Bowden) will be put on the spot. Hope Spencer (Annika Noelle) will push them to reveal why they’ve been talking about Beth Spencer, so they’ll have to think fast and deliver a believable explanation.

Over with Thomas Forrester (Matthew Atkinson), he’ll figure out a way to use Caroline Spencer (Linsey Godfrey) to his advantage. Later, Hope will get choked up over a sweet letter. It’ll supposedly be from Caroline, but it’ll probably just be Thomas playing games with Hope’s heart.

Afterward, Hope will have a crucial discussion with Liam Spencer (Scott Clifton). She’ll think it’s time to talk about where they stand and why this marriage won’t work. By the time Steffy Forrester (Jacqueline MacInnes Wood) hits town on May 23, she’ll be stunned to learn “Lope’s” headed for a divorce.

The Bold and the Beautiful spoilers say Hope will give a concerned Brooke Forrester (Katherine Kelly Lang) updates. She’ll refuse to back down on this decision, so Brooke will just give her the love she needs. Supporting Hope will be what matters most to Brooke in these tough moments.

Meanwhile, Ridge Forrester (Thorsten Kaye) will have some advice for Thomas. Perhaps he’ll think Thomas should back off a bit – at least until Hope’s wounds heal. She’ll be dealing with a lot thanks to the end of her marriage, but Thomas will insist on striking now. He won’t want to risk a “Lope” reunion or even the progress he’s made.

Ridge will comfort Brooke a bit later, but he’ll catch her off guard with his opinion. Ridge may hint that everything’s working out for the best, but Brooke just won’t think so. She may contend that Thomas is to blame for this.

Back with Steffy, she’ll welcome Hope into her home for some bonding time with the girls. Hope and “Phoebe Forrester’s” (Isabella de Armas and Rosalind Aune) reunion will bring some can’t-miss scenes! During the week of May 27-31, Hope will seek Steffy’s assistance. She’ll run into a problem with Liam, so she’ll feel like Steffy may be able to help.

Maybe Liam will change his mind and put up a fight on the divorce. That might lead Hope to Steffy again for a favor. Hope could convince Steffy to have a conversation with Liam and make him see that this is what has to be done.

Finally, B&B spoilers say Flo will be a mess of mixed feelings. She’ll like the wonderful life she’s found as a Logan, but how can she keep hurting Hope with lies? Wyatt Spencer (Darin Brooks) will manage to distract Flo as they grow closer again. They’ll heat things up, so it probably won’t be long until these high school sweethearts make love.