The Bold and the Beautiful Spoilers Next 2 Weeks: Hope Breaks Down, Confuses Phoebe With Beth – Wyatt’s Bombshell Stuns Flo

BY Heather Hughes on June 23, 2019 | Comments: one comment
Related : Soap Opera, Spoiler, Television, The Bold and the Beautiful 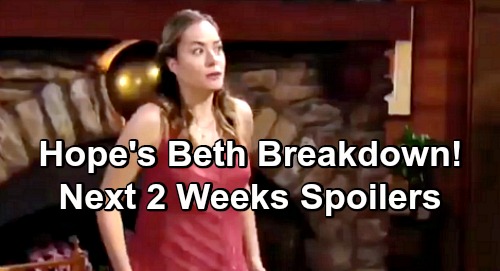 The Bold and the Beautiful (B&B) spoilers for the next two weeks tease that we’ll see some confessions and concerns. During the week of June 24-28, Brooke Forrester (Katherine Kelly Lang) will discuss Thomas Forrester (Matthew Atkinson) with Bill Spencer (Don Diamont). She’ll feel like Thomas’ behavior is disturbing and always has been. Brooke will just be particularly invested now that Hope Logan (Annika Noelle) is Thomas’ target.

Bill won’t deny that Thomas is trouble, but he won’t be completely against Thomas and Hope getting together either. If it means a chance at happiness for Liam (Scott Clifton) and Steffy Forrester (Jacqueline MacInnes Wood), Bill will be OK with just about anything. Brooke obviously won’t be happy about Bill’s stance, but she’ll be even more upset by the one Ridge Forrester (Thorsten Kaye) takes.

Emma Barber’s (Nia Sioux) death will bring tension as Brooke’s suspicions hit hard. She’ll sense that something very wrong went down, but Ridge will likely shut down that idea. He may argue this was an accident – plain and simple. Brooke’s worries will intensify after a chat with Pam Douglas (Alley Mills), who knows all about Emma’s hunt for Hope and her strange interaction with Thomas.

Other Bold and the Beautiful spoilers say a memorial service will be held for Emma. The people she worked with will be there along with those who truly loved her. Justin Barber (Aaron D. Spears) should be on hand to mourn his niece. Emma’s bestie, Tiffany (Maile Brady), will also pop up to grieve the loss.

Steffy and Hope will come together as they consider this tough blow. B&B spoilers say they’ll spend some time reflecting with Quinn Forrester (Rena Sofer) and Eric Forrester (John McCook). The four of them will recall Emma’s sweet spirit and acknowledge that she’s gone far too soon.

Back with Ridge and Brooke, they’ll get into an argument again. The conflict will rev up as they disagree about Hope’s next move. Ridge won’t see why Hope shouldn’t cave in and let Thomas love her. He’ll be convinced that Thomas only wants what’s best for Hope, but Brooke will think Thomas just wants what’s best for himself.

Meanwhile, Thomas will get in touch with Vincent Walker (Joe LoCicero), a former colleague who’ll deal him some drugs. Thomas will get something that he feels will do the trick. It seems like Thomas plans to drug Hope, but recent The Bold and the Beautiful spoilers indicate it’s Liam who will be drugged in order to induce passion with Steffy, driving a larger wedge between Lope and improving Thomas’ chances of snaring Hope – we’ll see how it all plays out in the week ahead.

Hope will end up breaking down in tears later. She’ll have some heartbreaking moments where she calls “Phoebe Forrester” (River Davidson and Madeline Valdez) by the name of Beth Spencer. If Hope is drugged up and out of it, that could explain why. Regardless, Hope will be in panic mode briefly. He’ll fear Hope’s inadvertently going to blow this for him.

Next, Wyatt Spencer (Darin Brooks) will make a daring decision. Thanks to Emma’s untimely passing, Wyatt won’t want to waste any more time. Will he ask Florence “Flo” Fulton (Katrina Bowden) to marry him? This storyline appears to be headed in that direction, so Flo’s probably in for a shock.

During the week of July 1-5, Thomas will get closer to his goal. His plan to woo Hope will begin to work, but there’ll inevitably more snags eventually. Thomas will have to keep his secret club under control while he keeps at it.

Finally, a former couple will get hot again. Two characters who were paired in the past will rekindle their spark. It sounds like Liam and Steffy may hit the sheets again soon!