The Bold and the Beautiful Spoilers Next 2 Weeks: Lope Stunned by Steffy’s Huge Revelation – Thomas and Sally’s Tense Encounter 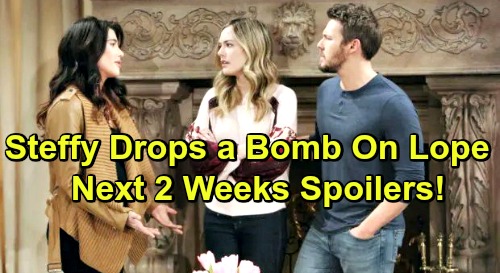 The Bold and the Beautiful (B&B) spoilers for the next two weeks tease that some heated confrontations are on the way. During the week of March 11-15, Zoe Buckingham (Kiara Barnes) will blow her top over Florence “Flo” Fulton’s (Katrina Bowden) constant drama. She’ll be furious with Flo for attending Wyatt Spencer’s (Darin Brooks) dinner party and bonding with significant guests.

Zoe will want Flo to stay as far away from Hope Spencer (Annika Noelle) and Liam Spencer (Scott Clifton) as possible. However, that’s not going to happen – especially now that Flo has reconnected with Liam’s brother. Wyatt is Flo’s former flame, so that’ll give Zoe something else to be upset about.

Later, Dr. Reese Buckingham (Wayne Brady) will get a warning from his partner in crime. Flo will insist that she won’t be silenced any longer. She’ll plan to tell Hope the truth and argue that there’s nothing Reese can do about it. Nevertheless, Flo tends to chicken out when it’s actually time to divulge the baby shocker. That should work to Reese’s advantage.

Over with Sally Spectra (Courtney Hope), she’ll get some words of reassurance from Wyatt. He may sense that she’s uneasy about Flo walking back into his life. The Bold and the Beautiful spoilers say Wyatt will remain committed to his future with Sally. He’ll promise Sally that it’s brighter than ever!

Next, Steffy Forrester (Jacqueline MacInnes Wood) will stun Liam and Hope with the news that she’s leaving town. She’ll think it’s best if she takes a step back and lets them work on their marriage. Despite Dr. Taylor Hayes’ (Hunter Tylo) attempt to change her mind, Steffy will pack up the girls and fly to Paris as soon as possible. She’ll count on Hope and Liam to have truly healed once she returns.

Before Steffy heads out, she’ll have a chance to see Thomas Forrester (Matthew Atkinson). He’ll show up for a little family reunion with Douglas Forrester (Henry Joseph Samiri) in tow. The Bold and the Beautiful spoilers say Thomas will have a tense encounter with Sally later. Bill Spencer (Don Diamont) will also battle guilt over the romantic chaos he once brought to Thomas’ life.

Other B&B spoilers state that Bill and Katie Logan (Heather Tom) will bond over lunch. Their many matchmakers will make this meal happen, so Katie and Bill will acknowledge that. They’ll decide that Will Spencer (Finnegan George) always has to come first, but they won’t rule out the idea of finding love again.

That’s good since Katie will fall harder during the week of March 18-22. The Bold and the Beautiful spoilers say Katie will see all the wonderful traits in Bill that she once adored. Now that he’s turned his life around, Katie will be reminded of the guy she fell for years ago. She’ll think that guy’s back and possibly even better. Katie won’t let herself rush into anything, but her heart will definitely be open.

Elsewhere, Brooke Forrester (Katherine Kelly Lang) will fume over Ridge Forrester’s (Thorsten Kaye) kiss with Taylor. She’ll feel like their past problems are coming back to haunt them, so there’ll definitely be trouble in “Bridge” paradise. We’ll give you updates as other B&B details emerge. Stick with the CBS soap and don’t forget to check CDL often for the latest Bold and the Beautiful spoilers, updates, and news.