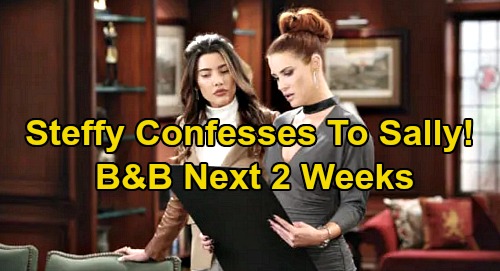 The Bold and the Beautiful (B&B) spoilers for the next two weeks tease that some curveballs are coming up. During the week of December 23-27, Brooke Forrester (Katherine Kelly Lang) will get a huge shock when she approaches Steffy Forrester (Jacqueline MacInnes Wood) and unleashes her wrath. Brooke will be upset about Steffy rehiring Zoe Buckingham (Kiara Barnes), but Steffy will insist it’s all part of the plan!

After Steffy explains what she’s plotting with Liam Spencer (Scott Clifton), Brooke will be impressed. However, she’ll also be more than a little miffed that she was left on the outside. Brooke will lash out at Liam, but she’ll eventually settle down and agree that Thomas Forrester (Matthew Atkinson) can’t be trusted. She’ll hope this daring scheme of Liam works out and helps them protect Hope Logan (Annika Noelle).

As for Hope, she’ll remain wary of Thomas’ motives for pursuing Zoe. Hope will find it difficult to believe that they’ve formed this instant connection – especially when Thomas seems to make moves on Hope at work. She’s decided to join forces with Thomas on the fashion showdown, but she won’t like it when he gets close and guides her hand while designing. Hope will call Thomas out for doing his usual routine.

At that point, Hope will want Thomas to look her in the eyes and be honest. She’ll try to shut down any games and figure out for sure if Thomas has moved on. Thomas will insist his obsession is a thing of the past, but that certainly won’t be the case. Nevertheless, Hope will apparently give Thomas the benefit of the doubt. She’ll watch Douglas Forrester (Henry Joseph Samiri) while Thomas goes on a date with Zoe, who’ll easily be swept off her feet.

Zoe will find it increasingly tough to stick to this whole double agent thing. She’ll be falling hard for Thomas, which will concern Steffy. Zoe will promise she’s still committed to helping Steffy and Liam, but Steffy just won’t be so sure. Liam will also have to wonder about Zoe’s loyalty after Hope fills him in on her date night with Thomas. It’ll trouble Liam to think they could be losing their secret weapon.

Other Bold and the Beautiful spoilers say Sally Spectra (Courtney Hope) will prepare for the fashion competition. She’ll be eager to put her designs up against Thomas’ – particularly since he’s an ex who’s burned her several times! This showdown should bring some exciting moments once it eventually gets underway.

Christmas will also be celebrated, so that’s something to look forward to. The holidays are always a good time on B&B. During the week of December 30-January 3, Sally will hear Steffy’s confession. It turns out Steffy will open up about Liam, so this could involve her deep feelings for him. Of course, there’s also a chance Steffy will admit Liam’s plan to expose Thomas. Either way, Sally’s lips should be sealed.

Meanwhile, Ridge Forrester (Thorsten Kaye) will happily watch his son move things along with Zoe. Ridge will feel confident that Thomas is over Hope and will point to his blossoming romance as evidence. He’ll once again make a pitch for Brooke to forgive Thomas and help him heal their marriage, but that just may not be possible. Brooke can’t accept the idea that Thomas has really seen the light.

Thomas is indeed still scheming and will admit it to Shauna Fulton (Denise Richards), but he won’t fret about her blabbing. He’ll point out that they’re on the same side. Thomas would much rather see Ridge with Shauna than Brooke, so he’ll share his plan to be with Hope and push Brooke out of the picture for good.