BY Heather Hughes on April 7, 2019 | Comments: one comment
Related : Soap Opera, Spoiler, Television, The Bold and the Beautiful 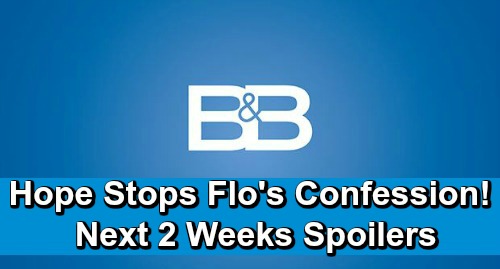 The Bold and the Beautiful (B&B) spoilers for the next two weeks tease that things are about to heat up on the CBS soap. During the week of April 8-12, Quinn Forrester (Rena Sofer) will get a shock. She’ll be horrified when Shauna Fulton (Denise Richards) explains that Bill Spencer (Don Diamont) is Florence “Flo” Fulton’s (Katrina Bowden) father. This is going to be awkward since Flo dated Wyatt Spencer (Darin Brooks), Bill’s son.

Fortunately, there’s a good chance Shauna is wrong. She’ll eventually confess that she can’t be entirely certain of Flo’s paternity. She only hooked up with Bill once and there were other one-night stands that could’ve resulted in Flo’s conception. Still, Quinn will want to know the truth. She was all set to play Cupid for Wyatt and Flo again, so she needs to know if they’re siblings or not!

Bill will obviously want the facts, too. He’ll hurl accusations after Shauna claims he could be Flo’s dad. Bill will argue that Shauna just came out to Los Angeles in an attempt to shake him down for cash. He won’t buy that Flo’s his kid, but he’ll have to wonder.

Wyatt will have to wonder as well, especially after Flo’s next move. She’ll plant a kiss and most likely tell Wyatt she still loves him, so the possibility that they may be related will catch them off guard later. The Bold and the Beautiful spoilers say Wyatt will also end up revealing a secret after promising to keep it. He’ll betray Flo’s trust by disclosing it to Bill, Quinn and Shauna, but he’ll have a good reason.

Perhaps this is about the DNA test kit and Flo’s efforts to find a matching relative. If there’s a match and Flo wants to keep it quiet, that could be something that comes up. However, Wyatt may have to reveal it if it proves he’s not related to Flo and can ease everyone’s mind.

Over with Flo and Donna Logan (Jennifer Gareis), they’ll exchange introductions thanks to Hope Spencer (Annika Noelle). Donna will mention that she also gave a baby up for adoption and can relate to Flo’s experience. B&B spoilers say that’ll rev up the guilt even more for Flo. She didn’t give a baby up for adoption at all. Flo simply helped rob Hope of raising her beloved Beth Spencer, so she’ll feel terrible.

Once Flo decides she can’t take it anymore, she’ll start to make a confession. Alas, Hope will inadvertently sabotage it. She’ll get the wrong idea about what Flo’s trying to divulge and hijack her plan to come clean.

Some DNA test will eventually prove whether Bill is Flo’s father or not. Wyatt and Flo’s DNA efforts could expose a connection, too. The Bold and the Beautiful spoilers say the Spencers, Logans and Forresters will be taken aback by the true story of Flo’s past.

During the week of April 15-19, Quinn will leave Bill with something to mull over. She’ll explain that Flo is “Phoebe Forrester’s” (Isabella de Armas and Redford Prindiville) birth mom, so Bill may think something’s off here.

Other Bold and the Beautiful spoilers say Shauna will be floored by the news that Flo was pregnant. B&B fans know Flo never really was, but Shauna will assume her daughter gave birth without her knowledge. Shauna’s surprise will leave Flo frantic, but is there more to the story?

It’s possible Flo was believed to be infertile or something along those lines. There’ll undoubtedly be some way for Shauna to poke holes in Flo’s tale and pry a confession out of her. The next two weeks will bring some hot drama! We’ll give you updates as other B&B details emerge. Stick with the CBS soap and don’t forget to check CDL often for the latest Bold and the Beautiful spoilers, updates, and news.