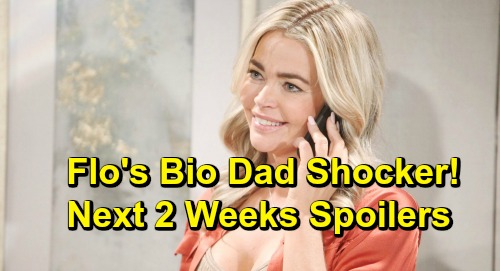 The Bold and the Beautiful (B&B) spoilers for the next two weeks tease that some heated confrontations are on the way. During the week of April 1-5, Brooke Forrester (Katherine Kelly Lang) will launch another attack on her rival. She’ll blame Dr. Taylor Hayes (Hunter Tylo) for the drama that’s been going on between them for decades and add that she’s using their daughters to continue it.

Taylor wants Steffy Forrester (Jacqueline MacInnes Wood) to reunite with Liam Spencer (Scott Clifton), so she’d like to push Hope Spencer (Annika Noelle) in Thomas Forrester’s (Matthew Atkinson) direction. When Ridge sticks up for Taylor, Brooke won’t be pleased. Ridge will get why Taylor wants Steffy to be happy, but Brooke won’t think Hope should suffer because of it.

Later, Brooke will insist that Liam has to stay on guard. She’ll warn him about Taylor’s plan to essentially play matchmaker for Thomas and Hope. The Bold and the Beautiful spoilers say Liam will dismiss Brooke’s worries. He’ll contend that his marriage is solid and urge Brooke to let it go. However, Brooke will still feel like Taylor could blow things up for “Lope” if they don’t watch out for her.

Over with Bill Spencer (Don Diamont) and Katie Logan (Heather Tom), they’ll figure out that Will Spencer (Finnegan George) has been playing Cupid for them. This B&B family will come together for some laughs and hugs, so Will should appreciate that. Next, Quinn Forrester (Rena Sofer) will push Sally Spectra’s (Courtney Hope) buttons. As you might expect, Sally will push right back!

That’ll bring Shauna to town, but she won’t be eager to share the news about Flo’s bio dad. Shauna will think that’s a secret that should stay buried. Instead, Shauna will want to catch up with Quinn. They were best friends when they lived in Las Vegas, so they hit it off again like no time has passed.

Back with Wyatt and Flo, they’ll grow closer as they mull over what they have in common. Wyatt will recall finding out who his father was and hope that it happens for Flo, too. The Bold and the Beautiful spoilers say Shauna will be taken aback when she learns Quinn is married to Eric Forrester (John McCook). That could he an important part of this big paternity plot.

During the week of April 8-12, Quinn will be perplexed. She won’t get why Shauna’s still keeping Flo in the dark on who her father is. Quinn won’t see the harm in the truth coming out, but she might change her mind if she knew the answer. Plenty of clues point to Eric Forrester (John McCook) as Flo’s dad, so we’ll see if that turns out to be the case.

Other Bold and the Beautiful spoilers say Zoe Buckingham (Kiara Barnes) will face a tough task. She’ll have to put out fires constantly when it comes to Flo, who will remain drawn to Hope. Zoe may wonder if they can really keep this baby secret under wraps as planned, but she’ll just have to hang in there and hope for the best.

It looks like the next two weeks will bring some great action. We’ll give you updates as other B&B details emerge. Stay tuned to the CBS soap and don’t forget to check CDL often for the latest Bold and the Beautiful spoilers, updates, and news.