The Bold and the Beautiful Spoilers Next 2 Weeks: Steffy Pulls Liam Closer – Hope Goes Too Far – Wyatt Struggles To Choose

BY Heather Hughes on October 20, 2019 | Comments: one comment
Related : Soap Opera, Spoiler, Television, The Bold and the Beautiful 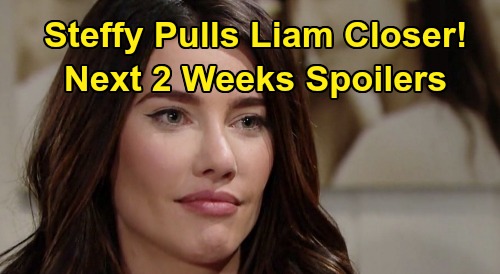 The Bold and the Beautiful (B&B) spoilers for the next two weeks tease that some bombs will drop on the CBS soap. During the week of October 21-25, Zoe Buckingham (Kiara Barnes) will face some surprises. Thomas Forrester (Matthew Atkinson) will reveal that Zoe’s the inspiration behind his latest designs and push her to help him rise to the top at Forrester Creations.

Of course, Thomas will offer to help Zoe in return. He might contend that if she sticks with him, he’ll get her modeling career back on track. Zoe will have a lot to mull over in the coming episodes, especially since she doesn’t trust Thomas. That’s something he’ll have to work on rebuilding.

Over with Quinn Forrester (Rena Sofer), she’ll urge Bill Spencer (Don Diamont) to help with a breakup plot. Quinn will want Bill’s support on her efforts to break up Sally Spectra (Courtney Hope) and Wyatt Spencer (Darin Brooks). Bill will refuse to be part of a plot, and he’ll actually tip Wyatt off to his mom’s meddling. Even so, Bill will admit Florence “Flo” Fulton (Katrina Bowden) isn’t so bad after all.

Flo sacrificed a kidney to save Katie Logan’s (Heather Tom) life, so Bill will be eternally grateful. He’ll praise Flo and leave Wyatt more torn than ever. Wyatt will remember Flo’s best qualities and accept that maybe she’s still the woman he fell in love with. What does that mean for Sally? That’s what Wyatt will have to decide, but it’s easier said than done!

Other Bold and the Beautiful spoilers say Thomas will unleash his fury. He’ll find out Hope’s fighting for permanent custody of Thomas, so he’ll lash out in a big way. Ridge Forrester (Thorsten Kaye) will learn Brooke Forrester (Katherine Kelly Lang) helped Hope put this plan together, so he’ll blast his wife. B&B fans can expect quite a battle to break out.

Ridge will make it crystal clear that Douglas belongs with his father and that’s where he’ll remain. He’ll warn that nobody’s taking Douglas from Thomas. If anyone dares to take this any further, they’ll have to deal with Ridge’s wrath. Later, Thomas will find Douglas and share a tender moment with the kid. He’ll apologize for how he’s treated Douglas over these last few months and promise to do better.

Thomas will assure Douglas that he can be a good dad again. He’ll hope they can get their father-son relationship back on track. Back with Ridge and Brooke, their marriage will be falling apart. It sounds like this whole Thomas ordeal will pretty much burn things to the ground – at least for the time being.

During the week of October 28-November 1, Ridge will move in the Forrester mansion with his son and grandson. Thomas will be glad he’s still got custody of Douglas, but Hope just won’t quit. Liam Spencer (Scott Clifton) may think it’s time to accept there’s nothing more Hope can do. He certainly won’t think it’s a good idea to interrupt the Halloween festivities and demand Thomas sign new joint custody papers.

Hope will be convinced she can win Thomas over through this new angle, so she’ll go against Liam’s advice as well as Brooke’s. It won’t be long until Hope and Thomas are arguing at the Halloween bash. The Bold and the Beautiful spoilers say there’ll be some other tricks and tricks on this spooky holiday, so don’t miss what’s in store.

As for Liam, he’ll have a happy Halloween at Steffy Forrester’s (Jacqueline MacInnes Wood) place. With Kelly Spencer (Zoe Pennington) and Beth Spencer (River Davidson and Madeline Valdez) in the mix, they’ll have another of “Steam” family scenes. It could give Steffy even more hope that Liam will eventually come back to her.