The Bold and the Beautiful Spoilers Next 2 Weeks: Thomas Lives – Relief For Ridge, Arrest Fears For Brooke – Flo’s Surprising Visits

BY Heather Hughes on August 25, 2019 | Comments: one comment
Related : Soap Opera, Spoiler, Television, The Bold and the Beautiful 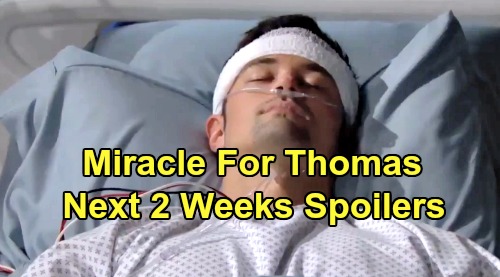 The Bold and the Beautiful (B&B) spoilers for the next two weeks tease that some scary moments are coming up. During the week of August 26-30, Thomas Forrester’s (Matthew Atkinson) life will hang in the balance. After Thomas is rushed to the hospital, his chances of survival will likely be slim. Dr. Jordan Armstrong (Vincent Irizarry) will do his best to treat Thomas, but his condition will be awfully dire.

Ridge Forrester (Thorsten Kaye) will think Brooke Forrester (Katherine Kelly Lang) is responsible for this. From his perspective, Brooke will look like she wanted to get rid of Thomas. He’ll rant about her pushing Thomas off the cliff and fear that his son may be dead as a result. Brooke will be horrified that Ridge would suggest she’s guilty. She won’t get why Ridge refuses to see this as a dreadful accident.

As for Liam Spencer (Scott Clifton), he’ll try to console a frazzled Hope Logan (Annika Noelle). She’ll feel bad for both Thomas and Brooke. Hope will put the blame on herself, but Liam won’t want her talking like that. He’ll insist Thomas is the one and only person who deserves to be held at fault.

The Bold and the Beautiful spoilers say Liam will even blast Thomas’ unconscious body. He’ll rant in Thomas’ hospital room, but Ridge will put a stop to it. They’ll bicker over Thomas’ role in his own crisis as they await more news from Dr. Armstrong. Things will look quite bleak as time goes on, but there’ll be hope eventually.

In the meantime, Florence “Flo” Fulton (Katrina Bowden) will get a visit from her mom. Shauna Fulton (Denise Richards) will head to the jail and face the harsh reality of what Flo’s up against. She won’t want this life for her daughter, so she’ll seek Quinn Forrester’s (Rena Sofer) sympathy and help.

Other B&B spoilers say Detective Alex Sanchez (Jeremy Ray Valdez) will grill Brooke and Ridge about Thomas’ ordeal. He’ll wonder exactly how this happened, so we’ll see how they handle the detective’s pressure. During the week of September 2-6, another visitor will arrive for Flo. It’ll be Ridge this time, but what will he want?

The Bold and the Beautiful spoilers say Ridge will try to get some answers out of Flo. He may think she can offer more insight into Thomas’ mental state during all their secret-keeping. Ridge might wonder if Flo left out any details that might be helpful. He’ll still be trying to make sense of Brooke’s actions and questioning how dangerous Thomas actually was.

It’s also possible Flo will get off the hook or find a way to get her charges reduced. Ridge might want answers about that, but Shauna and Quinn would probably be a better place to turn! Back with Thomas, he’ll wake up in the hospital following his medical crisis. Will he hold Brooke responsible like Ridge or cut her some slack? Regardless, Ridge will be relieved to know Thomas pulled through.

It sounds like the next two weeks will bring some great action. We’ll give you updates as other B&B details emerge. Stay tuned to the CBS soap and don’t forget to check CDL often for the latest Bold and the Beautiful spoilers, updates and news.