The Bold and the Beautiful Spoilers: Paternity Results Bombshell – Flo May Be Bill’s Daughter, But Is Wyatt Really His Son?

BY Heather Hughes on April 4, 2019 | Comments: one comment
Related : Soap Opera, Spoiler, Television, The Bold and the Beautiful 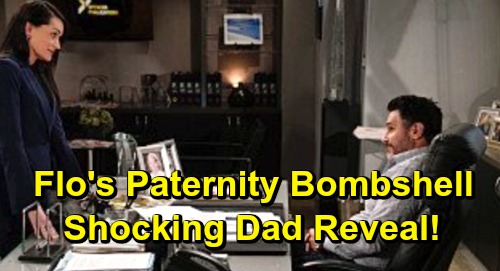 The Bold and the Beautiful (B&B) spoilers tease that both Shauna Fulton (Denise Richards) and Quinn Forrester (Rena Sofer) are in for a shock. When Quinn reveals the name of Wyatt Spencer’s (Darin Brooks) father, Shauna will look like she’s seen a ghost! Shauna will get flustered as she reacts to this big news. She’ll ask Quinn to repeat herself just so she can be sure she’s got this right.

Quinn will confirm that Bill is indeed Wyatt’s dad, which will leave Shauna unsettled. It’s pretty obvious that Shauna at least believes Bill is Florence “Flo” Fulton’s (Katrina Bowden) father. Whether that’s true or not, Shauna will be rattled over Quinn’s revelation. She’ll be determined to keep Flo in the dark, so Quinn will have to wonder why.

It won’t be long until Quinn puts it all together and grills Bill about his past with Shauna. That’ll lead to a paternity test during the week of April 8-12. Will the results reveal that Flo is Bill’s biological daughter? B&B has a few interesting options here.

It’s possible the results won’t be a match, which would deepen the mystery and allow this storyline to continue. It’s also possible Flo will be a Spencer, which would make Wyatt her half-brother. However, The Bold and the Beautiful spoilers point to Quinn’s continued matchmaking efforts. That could mean the test will be altered or that Wyatt and Flo won’t be related at all.

Of course, there’s one truly surprising option that we have to consider. Since B&B making up new backstories with Flo and Shauna, they could easily rewrite history again. The Bold and the Beautiful desperately needs something buzzworthy right now. With Steffy Forrester (Jacqueline MacInnes Wood) out of the picture, the baby drama has gone dormant and left us in need of a different bombshell.

What if Flo is Bill’s child, but Wyatt isn’t?! B&B could easily have Quinn think back to some forgotten fling and later confirm that Wyatt belongs to someone else. Bill’s been all about solidifying family bonds lately. He lured Wyatt back to Spencer Publications, so that could be paving the way for a huge fall.

Plus, the show’s been emphasizing Will Spencer’s (Finnegan George) likeness to Bill and setting him up as the true Spencer heir. That could be another clue about what’s in store. This would also give Flo and Wyatt something to bond over. She might feel guilty that her digging shattered Wyatt’s father illusion. Wyatt could also face some identity struggles if his Spencer status is undone.

Bill would undoubtedly assure Wyatt that he’s his son now no matter what, but it would still be difficult for both of them. That’d give Bill and Katie Logan (Heather Tom) a reason to connect as well. Comforting an ex is a quick way to make a romantic reunion happen.