The Bold and the Beautiful Spoilers: Potential of Flo’s Pregnancy – Wyatt’s Loyalties Tested

BY Sean O'Brien on May 30, 2019 | Comments: one comment
Related : Soap Opera, Spoiler, Television, The Bold and the Beautiful 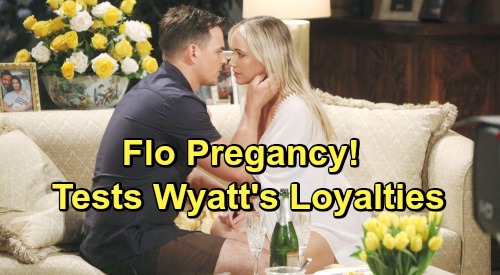 The Bold and the Beautiful spoilers tease that Flo Fulton-Logan (Katrina Bowden) and Wyatt Spencer’s (Darin Brooks) romantic reconnect obviously lends itself to speculation. While she’s pretending to be Phoebe Forrester’s (Madeline Valdez and River Davidson) birth mother, Flo really could be or become pregnant.

The add-in to Wyatt’s backstory has Flo as his former high school sweetheart. The former Las Vegas, Nevada, couple has deep drama surrounding them. But for the moment, they’re living carefree lives.

Sally Spectra (Courtney Hope) plays as one of B&B’s forever doomed characters. Her family business was destroyed by Bill Spencer (Don Diamont). Her interest in Liam Spencer (Scott Clifton), Phoebe-Beth’s father, went nowhere and then, she became involved with his brother.

Wyatt’s romance with Sally was unexpected. He happened upon her because B&B wrote Hope’s character back into the show after jettisoning the other personas that were part of Spectra Fashions.

Wally was endearing, just like Watie (Katie Logan, played by Heather Tom, and Wyatt). But it’s over, prematurely because Brook’s alter ego has an emotional hair-trigger.

For his part, Wyatt believes that Sally was withholding crucial family information. In arguable truth, she felt uncomfortable telling him what Thomas Forrester (Matthew Atkinson) was suggesting because Sally felt compassion due to his having recently become a single father and conflicted about having promised to keep the confidence he shared about Hope Spencer (Annika Noelle).

After their romantic reunion, Wyatt once again told Flo how he admired her sense of honesty. That specific portion of dialogue has been repeated by Brooks numerous times in recent weeks, which means it will be cited by Wyatt whenever he’s shocked by the Phoebe-Beth reveal.

However, if B&B has Flo carry Wyatt’s child he won’t be able to simply part amicably, as he did with Katie, or cast off Flo, as he just did to Sally. No, becoming a father would keep him tied to Miss Fulton-Logan.

There’s still a chance that Flo comes clean and tells Wyatt all that’s happened. That would not guarantee her quick forgiveness, even if she’s carrying his child. But it would allow for the possibility that Wyatt would, in time, become an advocate.

As Wyatt has also repeatedly said, Flo is living a dream life. B&B viewers realize that she’s standing on a house of high cards that could topple at any moment. That’s no way to live and would seem to eventually result in either the reveal itself, or some type of other consequence preceding it.