The Bold and the Beautiful Spoilers: Quinn Works To Destroy Wyatt and Sally’s Relationship 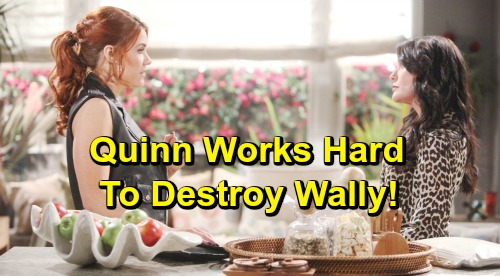 The Bold and the Beautiful spoilers tease that Quinn Forrester (Rena Sofer) will delve into a new project. She has been tolerant of Wyatt Spencer’s (Darin Brooks) relationship with Sally Spectra (Courtney Hope) for a while now, but that could only last for so long. Quinn has a tendency to disapprove of the women in Wyatt’s life. She wasn’t happy when Wyatt was with Katie Logan (Heather Tom), and now she frowns upon his union with Sally.

But there is someone who Quinn wouldn’t mind Wyatt getting together with, and that’s Florence “Flo” Fulton (Katrina Bowden). Flo was Wyatt’s high-school sweetheart, and she holds a special place in Quinn’s heart. And now that it’s clear that Flo and Wyatt aren’t brother and sister, Quinn would like nothing more than to push them back together.

Of course, it doesn’t help that Sally and Quinn clashed a bit before Sally left to go visit her grandmother. Sally isn’t one to shrink away from a conflict, and she addressed Quinn’s behavior head-on after Quinn gushed all over Flo and insinuated that Flo was better suited for Wyatt than Sally. Quinn didn’t appreciate that, and you could just tell that trouble was brewing.

Knowing Quinn, she’ll probably choose to attack and make Sally’s life miserable when Wyatt’s not around, so she can play Miss Innocent in front of Wyatt when Sally calls her out on her behavior. That would be a very “Quinn” thing to do. And since Sally and Quinn will be working together at Forrester, Quinn will have plenty of opportunity to undermine Sally.

Of course, Quinn knows that if she gets under Sally’s skin enough, it will eventually cause conflict between Sally and Wyatt. It looks like she’ll give it her best effort. Do you think she’ll succeed in breaking up Wyatt and Sally? Stay tuned to the CBS soap and don’t forget to check CDL often for the latest Bold and the Beautiful spoilers, updates, and news.