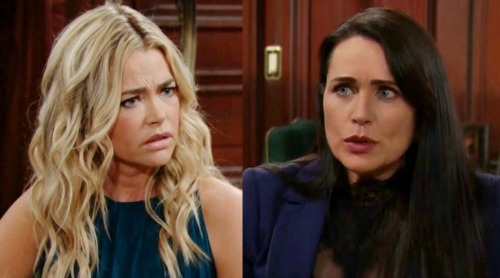 The Bold and the Beautiful (B&B) spoilers tease that Shauna Fulton (Katrina Bowden) will blast her daughter for participating in the baby scheme. However, it’ll quickly become apparent to Shauna that Florence “Flo” Fulton (Katrina Bowden) is remorseful and in over her head. When Flo says she’s going to come clean later this week, Shauna will insist on a delay so she can talk to someone important.

Before Flo does something drastic, Shauna will want to chat with Quinn Forrester (Rena Sofer) and give her a vague heads-up. However, Shauna’s lack of details may prove crucial. She won’t mention exactly what it is she’s worried about, so Quinn will assume it’s nothing they can’t get past. B&B spoilers say Quinn will advise Shauna to let any mistakes go and just move on with her life.

Of course, Quinn might be brought in the loop down the road. She might be willing to keep this secret for her bestie, especially since she wants Flo and Wyatt Spencer (Darin Brooks) back together. Nevertheless, Quinn will remain in the dark for now. She’ll unknowingly become the reason Shauna halts Flo’s confession.

The Bold and the Beautiful spoilers say Flo will insist she’s really going to do it this time. She’ll be fully prepared to come clean to Hope Spencer (Annika Noelle). That’s when Shauna will return to her daughter and argue that it’s not happening. She won’t want Flo to make a bigger mess of things.

Shauna will go over all the reasons why it’s a bad idea to spill the truth to the Logans. For starters, Flo could land behind bars. She could also drag down her partners in crime and would make Steffy Forrester (Jacqueline MacInnes Wood) suffer. Alienating her new family would be another big reason to stay quiet, so the list goes on and on.

In the end, Shauna may use love to truly sway Flo. Since Flo still has strong feelings for Wyatt and would obviously like another chance with him, Shauna may point out that a confession would mean destroying her shot. Even if Flo somehow managed to wiggle out of prison, Shauna may argue that Wyatt would never forgive her for this.

The Bold and the Beautiful spoilers say Flo will indeed keep her mouth shut, so Shauna will simply join the secret circle and help her daughter hide the real story. Naturally, they’ll face some crazy obstacles along the way! We’ll give you updates as other B&B news comes in. Stick with the CBS soap and don’t forget to check CDL often for the latest Bold and the Beautiful spoilers, updates and news.