BY hellodrdavis on January 6, 2019 | Comments: 4 comments
Related : Soap Opera, Spoiler, Television, The Bold and the Beautiful 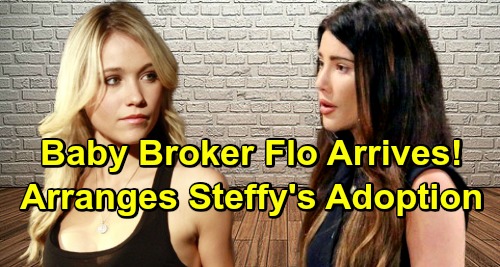 The Bold and the Beautiful spoilers tease that a new face will soon pop up on the B&B scene. Dr. Reese Buckingham (Wayne Brady) will be in serious trouble in the coming days, as he fends off a thug who’s intent on harming his daughter Zoe Buckingham (Kiara Barnes) and as he answers a barrage of questions about baby Beth Spencer’s death.

According to The Bold and the Beautiful spoilers, Reese will have reason to call upon a mysterious someone from his past, and that’s when newcomer ‘Florence’ or ‘Flo’ will appear on canvas. Flo, who will be portrayed by 30 Rock alum Katrina Bowden, will first appear on the new B&B episode airing on Monday, January 14.

But who exactly is Flo, and what will her connection be to Reese and the current storylines? Well, the timing of her appearance suggests that she may have something to do with Reese’s payoff of his massive gambling debt. Reese owes $200,000 to his debtors, and they’re demanding immediate payment.

At the same time, there’s every indication that Reese faked baby Beth’s death and led Hope Spencer (Annika Noelle) and Liam Spencer (Scott Clifton) to believe that Beth died when in fact, he’s hiding her away to sell her for a big cash payout. It would be a risky and desperate move on Reese’s part, but he may feel like he has no choice.

So, could Flo end up being a high-end baby broker who Reese calls upon to sell Beth? It could be that Reese has a shady past and has used Flo in the past to broker baby deals, and that he’ll call on her again for an emergency sale. Reese needs help fast to pay off his gambling debt, so it makes sense that Flo would be someone who could make that happen.

Of course, Reese may go into the baby deal with an agenda. He’s heard from Taylor Hayes (Hunter Tylo) just how much Steffy (Jacqueline MacInnes Wood) wants a baby sister for Kelly Spencer (Zoe Pennington), so it’s possible that he’ll have Flo try to broker an adoption deal with Steffy, or even with Taylor herself.

But for Steffy to adopt Beth, the whole thing would have to appear 100% legitimate and above board. The Bold and the Beautiful spoilers tease that Reese will glean some more information from Taylor and end up pointing Flo in the direction of Steffy’s adoption agency or attorney, and Flo will just happen to have a baby for Steffy to adopt.

Do you think Flo will be involved in the adoption storyline? Stay tuned to the CBS soap and don’t forget to check CDL often for the latest Bold and the Beautiful spoilers, updates, and news.