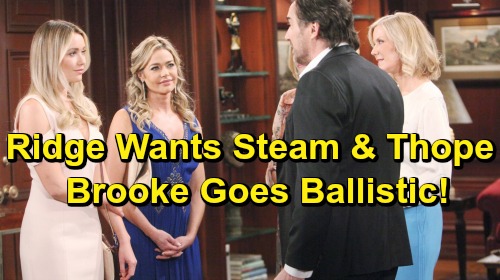 The Bold and the Beautiful spoilers tease that Brooke Forrester (Katherine Kelly Lang) is in for a shock. She has spent the better part of a year fighting for Hope Spencer’s (Annika Noelle) relationship with Liam Spencer (Scott Clifton).

Hope and Steffy Forrester (Jacqueline MacInnes Wood) were embroiled in a terrible battle for Liam’s heart, which caused a lot of stress for Brooke and Ridge (Thorsten Kaye).

Of course, Brooke wanted Liam to be with Hope, while Ridge wanted Liam to be with Steffy, and it caused a big rift between “Bridge.” Ultimately, the situation worked out after Steffy removed herself from the love triangle and Liam and Hope decided to marry. Ridge seemed to get over his disappointment, and Brooke and Ridge decided to stay out of their children’s love lives going forward.

But now a new situation is brewing. As B&B viewers know, Thomas Forrester (Matthew Atkinson) is back in town, and he’s decided that he wants Hope for himself. He’s on a mission to break up Lope, so that (a) Hope will be free to be with himself and Douglas Forrester (Henry Joseph Samiri), and (b) Liam will be free to go be with Steffy.

But Thomas’ plan will soon hit a snag. Thomas told Sally Spectra (Courtney Hope) about his plot to destroy Lope’s marriage, and B&B spoilers say that Sally will eventually tell Wyatt Spencer (Darin Brooks) about the plot. Then the whole thing will be out in the open, and it looks like the news will eventually trickle down to Brooke and Ridge.

Of course, Ridge already had his suspicions about Thomas’ true feelings for Hope. Thomas outright admitted to Ridge that he had never gotten over Hope, and Ridge warned Thomas at the time that Hope was a married woman and he needed to keep his feelings in check. So, Ridge probably won’t be surprised to learn that Thomas had a plan to ingratiate himself to Hope.

Eventually, Brooke and Ridge will talk about Thomas and his plot, and of course Brooke won’t be happy about the whole situation. First it was Taylor Hayes (Hunter Tylo) plotting Lope’s demise, and now Thomas. Brooke will likely be at her wit’s end over the whole situation.

The Bold and the Beautiful spoilers say that Brooke will be dismayed and upset when she hears Ridge’s take on the whole situation. Exactly what Ridge says remains to be seen, but it certainly sounds like he’ll indicate that he, too, would prefer for Liam to be with Steffy and for Hope to be with Thomas. It seems that Ridge will be “team Steam” and “team Thope.”

Certainly, Brooke won’t be impressed by this, and she might feel like Ridge’s family is ganging up on her daughter’s marriage to Liam. Look for a major rift between Brooke and Ridge going forward as they deal with their disagreement.

Do you think that Ridge and Brooke’s marital problems will crop back up once Brooke finds out how Ridge feels? Stay tuned to the CBS soap and don’t forget to check CDL often for the latest Bold and the Beautiful spoilers, updates, and news.