The Bold and the Beautiful Spoilers: Sally In Danger of Losing Wyatt Forever – Flo Healthy and Still In Love 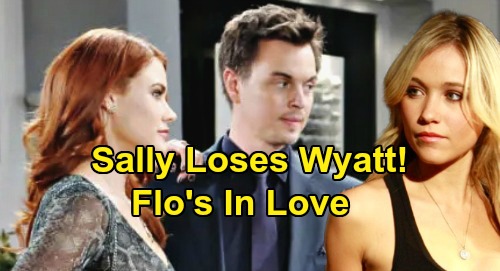 The Bold and the Beautiful spoilers tease that Sally Spectra (Courtney Hope) loves Wyatt Spencer (Darin Brooks), but that doesn’t appear to be enough. Flo Fulton’s (Katrina Bowden) recovery will reestablish the rivalry between both ladies and setup another likely couple’s switch.

As B&B viewers know, this isn’t the first time that Wally has been in danger of splitting. Earlier this year Wyatt opted to quickly evict Sally from his heart because he felt she’d betrayed his trust.

He gave two hundred large to his bookie, with Flo getting fifty thousand dollars she didn’t request, but later used a portion of to purchase a sharp sports car. Wyatt was surprised to see Flo’s ride, considered her outstanding debt.

Sally did not deserve to be dismissed by Wyatt, but she was. Wyatt realized that he’d shifted his faith in someone (Flo) who truly wronged him. He later crawled back to Sally and offered a sheepish explanation with his tail between his legs.

The no-strings embrace Sally offered to Wyatt, following his break with Flo, reinforced that Miss Spectra loves him unconditionally. Sure, Sally was open about needing to learn to trust Wyatt again. But he was forgiven and that should have mattered.

Of course, Katie Logan (Heather Tom) received the greatest benefit from Flo’s generosity. Katie’s life was saved through the donated kidney, while Flo’s sense of self was restored.

Along with others who were grateful, Wyatt also rediscovered what he loved most about his former high school sweetheart. Flo’s goodness shined through, reducing the terrible mistake she’d made in moral judgment during the Beth Spencer (Madeline Valdez and River Davidson) period.

To be clear, Sally’s slip of the tongue in calling Wyatt by his brother’s name was odd. It’s possible that she does love Liam Spencer (Scott Clifton). But downshifting to the worst thought imaginable, when implying that Sally wasn’t being honest, also indicated that she’s using Wyatt as a second-best choice.

Flo is the person who broke Wyatt’s trust. He is transferring those remnant feelings to Sally, which appears to reflect Wyatt’s desire to split from her again and return to Flo.