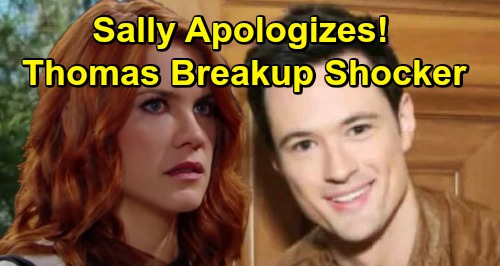 The Bold and the Beautiful (B&B) spoilers tease that Sally Spectra (Courtney Hope) will be surprised when Thomas Forrester (Matthew Atkinson) returns to town. Their first encounter during this stint will bring tension, but it’ll bring some interesting revelations as well. Sally was hurt when Thomas dumped her for Caroline Spencer (Linsey Godfrey) again, but perhaps we only got one side of the story.

B&B viewers will recall how Sally threw back several drinks and told her troubles to Wyatt Spencer (Darin Brooks). She’s was upset about Thomas breaking her heart again, but she admitted she didn’t really hear him out. Sally suggested that she bailed halfway through Thomas’ speech about splitting, so she may feel bad about that.

During the week of March 18-22, The Bold and the Beautiful spoilers say Sally will offer Thomas an apology. She’ll be remorseful about their breakup, so it could go back even further than the moment Sally was dumped. Perhaps she left something out that led Thomas to that decision. Sally might’ve done something that convinced Thomas he was with the wrong woman.

It could be a big issue like cheating or at least temptation. Then again, it could be something less explosive like Sally’s insecurities. She might’ve worried Thomas would land back in Caroline’s arms and basically set the stage for it to happen.

That would be a great setup for Sally’s insecurities to creep in with Wyatt. Now that Florence “Flo” Fulton (Katrina Bowden) is in town, it’s easy to imagine Sally’s jealousy growing. She seems fine with Flo now, but what if Flo leans on her ex more and more? Sally may fear that she’s losing Wyatt and drive him away with her jealous side.

Whatever the case, B&B fans will be eager to find exactly what happened between Sally and Thomas. It apparently wasn’t as cut and dry as it seemed, so The Bold and the Beautiful spoilers say we’ll hear some new story details and explanations.

Are you looking forward to Thomas’ comeback? Do you hope he eventually reunites with Sally or would you rather see her stick with Wyatt? We’ll give you updates as other B&B news emerges. Stay tuned to the CBS soap and don’t forget to check CDL often for the latest Bold and the Beautiful spoilers, updates, and news.