The Bold and the Beautiful Spoilers: Scott Clifton Dishes on Hope vs. Steffy – Leaks Lope Marriage Trouble Ahead 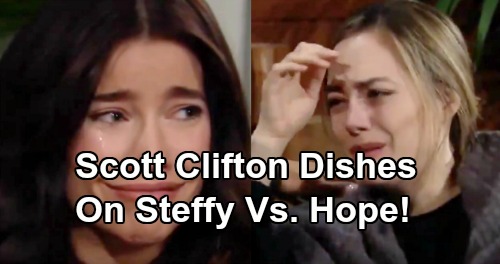 The Bold and the Beautiful (B&B) spoilers tease that Liam Spencer (Scott Clifton) will face a difficult journey. It’ll be both a personal one and a joint one as he tries to make sense of a Beth Spencer-less world with his wife. Hope Spencer (Annika Noelle) has naturally taken “Beth’s” death quite hard. Liam is in the same boat, but he has coping mechanisms that Hope doesn’t have.

Hope can rely on people she cares about – like Brooke Forrester (Katherine Kelly Lang) who will continue to support her. However, she doesn’t have a child she can play with or rock to sleep. Hope doesn’t have a little girl that she can watch grow up. Liam has all that through Kelly Spencer (Zoe Pennington), the daughter he shares with Steffy Forrester (Jacqueline MacInnes Wood).

That fact will add to an already problematic situation. The Bold and the Beautiful spoilers say Liam will battle guilt for many reasons in the weeks ahead. One of them is missing the birth, but there’s a deeper reason behind that guilt. It’s not just about not being in the room for the delivery. It’s actually about Steffy and how she fits in Liam’s life.

In an interview with Soap Opera Digest, Scott Clifton offered some great insight as well as hints about the drama to come. “It’s as tunnel-visioned as you can expect,” Clifton said. “What’s horrifying to him is that Hope would have to give birth without him there. He already has a lot of guilt that he has this special relationship with Steffy.”

Clifton suggested that Hope’s delivery debacle was just one of many relationship hurdles. B&B fans will recall how Hope once called Liam and Steffy out for their lingering bond.

She even gave Liam a free pass to reunite with Steffy if that’s what he wanted. Liam turned down that chance, but Hope wasn’t wrong about their connection. It’s easy to see that Steffy and Liam still share something unique.

Clifton brought up Kelly and how Liam wanted “Lope” to compete with “Steam” in a way. Again, it always goes back to Steffy. “He has a daughter with her, and so he wanted to create a symmetry there,” Clifton explained. “Every single thing that goes wrong with Hope and Liam offsets that symmetry, and Liam is conscious of all of that.”

Since Steffy is about to unknowingly adopt Beth, Hope’s suffering streak will carry on – at least for a while. Steffy’s destined to get her heart broken at the end of this storyline, but Hope’s sorrow will remain front and center for months. Clifton promised that Liam and Hope have “a long and painful road ahead.”