BY Heather Hughes on December 2, 2019 | Comments: one comment
Related : Soap Opera, Spoiler, Television, The Bold and the Beautiful 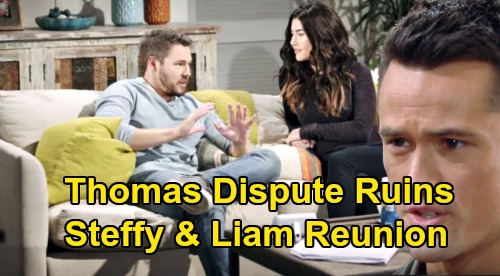 The Bold and the Beautiful (B&B) spoilers reveal that Scott Clifton (Liam Spencer) recently offered some hints about the future of his character. In an interview with Soap Opera Digest, Clifton opened up about the Douglas Forrester (Henry Joseph Samiri) custody issue and the impact it would have on his relationships. Of course, Douglas and his father are a package deal since Hope Logan (Annika Noelle) now shares custody with Thomas Forrester (Matthew Atkinson).

A Thomas discussion is the quickest way to start a fight on B&B lately. Thomas’ loved ones know he’s made some bad calls and has to find a better path forward. Even so, there’s a certain level of family loyalty on The Bold and the Beautiful. The Forresters tend to stick together, so that could affect Liam’s bond with Steffy Forrester (Jacqueline MacInnes Wood).

B&B seems to be gearing up for a “Steam” reunion, but will Thomas drama cause a setback? Clifton admitted Thomas and this custody agreement would present some challenges for Liam and Steffy. Liam isn’t thrilled about Thomas being tied to Hope forever through Douglas. However, if Liam wants to trash Steffy’s brother, he’ll have to take that negativity somewhere else!

“Steffy’s been forced to be a little objective in this story,” Clifton said. “She is Thomas’s sister. She loves her brother, so when Liam goes to Steffy and starts completely ripping on Hope’s decision to share a child with Thomas, Steffy’s not going to cheerlead for Liam. She’s caught in the middle.”

Clifton noted that it was tricky for Steffy since she’s battled anger toward Thomas, but he’s still her sibling at the end of the day. The Bold and the Beautiful spoilers say Thomas and Liam’s war over Hope is about to heat up, so that could bring more chances for Steffy and Liam to spar. Steffy just isn’t the person to turn to if Liam wants to unload his Thomas frustration.

Nevertheless, Steffy is always going to love Liam and care about his problems. As long as Liam can respect Steffy’s feelings, she may remain a solid confidant – especially when it comes to Liam’s issues with Hope. “I think Steffy has become a sort of respite for Liam to just feel normal for a second, and that’s been really nice for him,” Clifton said.