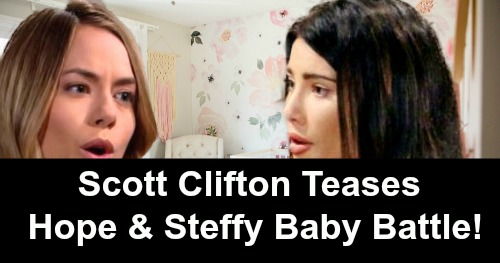 The Bold and the Beautiful (B&B) spoilers reveal that one CBS soap actor has high praise for his costar. B&B fans know Scott Clifton (Liam Spencer) is currently involved in a gripping grief storyline. Beth Spencer’s “death” was one of the biggest events the show’s done in quite some time. It tied in with The Bold and the Beautiful’s 8,000th episode, so that made it even more significant.

Of course, the drama’s still going strong thanks to Dr. Reese Buckingham’s (Wayne Brady) apparent baby swap scheme and the pain it’s caused. In an interview with Soap Opera Digest, Clifton discussed this shocking story and the great material it’s given him. He also pointed out that it’s given Annika Noelle (Hope Spencer) a chance to really show off her acting skills.

Up until now, Noelle was perfectly fine as Hope, but she didn’t really have any “wow” moments. The show just didn’t give her those scenes. That all changed with Noelle’s heartbreaking reaction to Beth’s “death.” Even the angriest of Hope haters were tipping their hats to the actress’ fine work!

Noelle is still delivering powerful performances as Hope struggles with this loss. Clifton had nothing but nice things to say about his TV wife. He even made a daring Daytime Emmy prediction! Clifton clearly has a good feeling about Noelle’s shot at taking home a statuette.

“I will tell this, and I mean it sincerely,” Clifton said. “I think Annika has a very good chance of not only getting nominated [for a Daytime Emmy], but I think she could actually win for Outstanding Supporting Actress. And I don’t say that lightly.”

However, we should point out that Noelle’s truly gripping material didn’t come until 2019 kicked off. That means she won’t be able to use those scenes until next year’s Daytime Emmy competition rolls around. On the bright side, Noelle may have even more scenes to choose from soon. Clifton offered some hints about strong emotions revving up.

“So, keep your eye on her for these next few months,” Clifton said. “She really sank her teeth into the material, and there’s still so much more to come.” You can bet Clifton is right about that! Since Steffy Forrester (Jacqueline MacInnes Wood) is unknowingly adopting Beth, that’ll raise the stakes and set up a conflict explosion down the road.