The Bold and the Beautiful Spoilers: See What Denise Richards Won’t Let Her Kids Watch 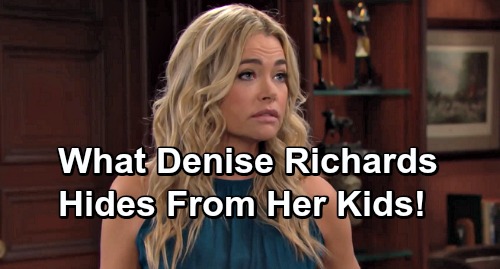 The Bold and the Beautiful spoilers has some news to pass on about a popular B&B star. Denise Richards, who portrays Shauna Fulton on the CBS soap, has of course appeared in many movies and TV series over the years. But one role in particular was the subject of a recent interview that Denise participated in with Yahoo Lifestyle Australia.

During the interview, Denise was asked about her role in the 1998 movie “Wild Things.” The movie featured a now-famous scene where she and costar Neve Campbell got quite intimate in a pool. The scene is considered to be more explicit than sex scenes typically were at that time, and it caused quite a stir.

Denise is mother to three daughters who range in age from 7 to 15, and she revealed during the interview that one of them brought up the scene to her one day. “I definitely did not give them a copy [of the film], she said. “I told them, ‘I don’t want you guys watching this,’ because one of my daughters brought it up to me, and I was shocked.”

Denise continued: “A couple of friends had told her about it and I just said to her, ‘I would appreciate if you didn’t watch it. It’s not age-appropriate and it was a movie I did, it was a script I loved, it’s me being creative. I worked with amazing actors and one day if you do see it, you may not agree with my decision but that’s what mom decided to do.’”

Denise also indicated that it would be startling for her kids to see her in her “Wild Things” role. “It’s weird for them, to see their mom in something that’s sexy or different,” she explained. “I think it would be very rude for me if it were my parents.”

Of course, Denise’s subject matter on B&B is much tamer than “Wild Things.” But her character Shauna Fulton may still be ruffling some feathers soon, as she gets to know Bill Spencer (Don Diamont) and Ridge Forrester (Thorsten Kaye) a bit better. We’ll see how well Katie Logan (Heather Tom) and Brooke Forrester (Katherine Kelly Lang) like Shauna cozying up to their men!

Are you enjoying Denise as Shauna on B&B? Stay tuned to the CBS soap and don’t forget to check CDL often for the latest Bold and the Beautiful spoilers, updates, and news.